Getting ready to save lives: Red Frogs crew 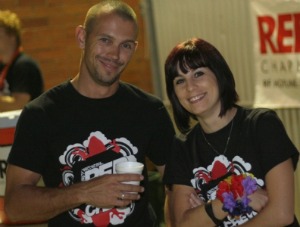 As thousands of Year 12 students take their final exams and begin the countdown until Schoolies Week, Red Frogs volunteers are preparing to do more than distribute their lolly namesake – they could save teens’ lives.

Red Frogs Australia Chaplaincy Network (Red Frogs) founder and director Andy Gourley says he regularly hears stories of how his volunteers were in the right place at the right time.

“Last year there was a young girl who hit the grog too hard and basically overdosed and got alcohol poisoning,” Mr Gourley said.

“She stopped breathing and it was one of our team who was able to be there, resuscitate her and get the paramedics there.

“We often get parents who’ll write in and say ‘thank you, you took our daughter home when she was passed out on a beach, and I’d hate to think what could have happened if you guys weren’t there’.”

Red Frogs was founded in 1997, when Mr Gourley and his skateboarding crew were recruited by a Gold Coast hotel manager to provide support to students during Schoolies Week.

After buying a $10 box of Allen’s Frogs Alive Red Frogs to use as an icebreaker, students quickly dubbed them ‘the Red Frogs crew’ and the name stuck.

From these humble beginnings, the Brisbane-based chaplaincy network has since spread throughout Australia and overseas, with Red Frogs programs now operating in the United States, the United Kingdom, Canada and New Zealand.

“It is Red Frogs Australia’s mission to safeguard the next generation by changing the atmosphere of a party or an event to provide a fun, yet safe, lifestyle alternative for young people,” Mr Gourley said.

Mr Gourley likens the Red Frogs role to that of a “fence at the top of the cliff, instead of the ambulance at the bottom”.

“Often ambos will get there just in time or just after the time, so it’s about being that fence, that prevention, which is really important,” he said.

“Red Frogs is safeguarding future doctors, lawyers, CEOS, sporting personalities while they’re all 17 and haven’t grown a brain yet.

“It is real honour to be in that position to really look after dudes at one of the biggest binge drinking parties in Australia.”

Student Lia Convery, 21, volunteered with Red Frogs last year on Queensland’s Gold Coast and will do so again this year, because students “need someone looking out for them”.

“They’ve just finished school, the future’s uncertain and it’s the first time many friends have lived together for a week, which can end up messily,” she said.

“There’s so much build up and expectation for this one week that it creates this intense, high pressure environment.

“As a volunteer we’re just there for the students, hanging out with them and checking up on them.

Minister for Community Services and Housing and Minister for Women the Honourable Karen Struthers says up to 35,000 students are expected to descend upon the Gold Coast for the two-week long party.

“We can’t stop school leavers celebrating the end of Year 12 but we can make sure they are safe and local residents and businesses aren’t disrupted,” Ms Struthers said in a statement to the media.

“On the Gold Coast, the Department of Communities will again work with Crime Stoppers Queensland to coordinate about 250 local volunteers and manage Schoolies headquarters.”

Ms Struthers said this year the Surfers Paradise Chill Out Zone will operate with extended hours until 5.30am, with staff and volunteers providing services like band-aids, water bottles, and a place to sit down.

Mr Gourley says the best advice he can give to schoolies is to be themselves and look after their friends.

“In other words, if you don’t normally drink like a fish and sleep with everything that moves every weekend, don’t become that type of person at Schoolies Week,” Mr Gourley said.

“Be yourself – don’t get sucked into an artificial momentum where you think you have to become a binge drinker just to impress your mates, because you could be making one of the most devastating decisions of your lifetime.”

Mr Gourley also says schoolies should not be afraid to call emergency services.

“People think you’ve got to ring 000 when you’re almost dead, but ring 000 if you’re even unsure – better to be safe than sorry,” he said.

Schoolies Queensland Government – when and where, safety tips, access and ID, getting around