Brisbane markets on the rise 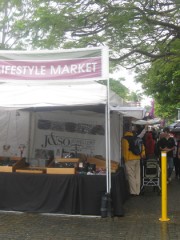 Crowds flocked at the South Bank markets, despite the rain Photo: Phoebe Clark

Markets across Brisbane, both produce and vintage, have significantly increased in number, which market organisers say is very good for the south-east Queensland city.

Among the regular markets, such as South Bank’s Lifestyle market, the Rocklea Twilight markets and the Riverside markets (which has been running for 25 years), new markets have begun to develop this year.

Markets like A Frock Affair, Marky Markets, the Valley laneway markets and the Suitcase Rummage are all vintage markets that began this year.

The Valley markets on Brunswick Street are one of the longest running markets of this kind in Brisbane and have become more design focused.

“Real estate is so expensive, and there’s such a big risk factor for young people who want to start a business,” she says.

“A lot of people aren’t business savvy enough to have a retail space … they can kind of work the weekends at the markets and then go home and still have a life.”

“You’re always going to find something different at each market, so I don’t think there’s a concern that people will lose interest.”

Ms Pollak says social networking has caused a lot of the success designers have had at these markets.

“It’s so expensive to advertise, it’s so hard to get free press – when you’re a small business person, you don’t have the time or the capital,” she says.

“Social media is the way of the future.”

Ms Pollak says markets are a different way of shopping that is appealing to more people.

“Markets offer such diversity, it’s like a shopping centre that changes every week,” she says.

“It’s a fresh way of shopping and it’s a way of getting something that no-one else has.”

“It gets people out and about, it encourages young artists and crafters to share their work,” she says.

“You can also fill your wardrobe for less than if you were shopping at a clothes store in the city.”

Marky Markets began in June this year and Ms Johnston says vintage markets like this are really good for local designers in Brisbane.

“These people work really hard in creating a vibe around their wares and they predominantly sell out of markets,” she says.

Designer Annie Boake, who is based in Melbourne, recently sold her wares at the Valley Markets, and says she was impressed by the amount of interest her designs received.

“I was selling scarves from op shops that have been revamped … my stuff’s a bit different, and a lot of people were interested and asked a lot of questions,” she says.

Ms Boake says she researched the market culture in Brisbane, and found Brisbane people are really interested in vintage design.

“There’s quite a culture for it, people enjoy the market up there [in Brisbane],” she says. 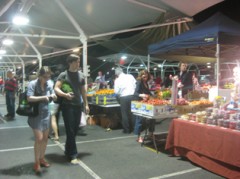 It is not only vintage markets on the rise – produce and farmers markets are also growing in popularity.

Established markets such as the Rocklea markets and Northey Street organic markets still continue, and many other produce markets have opened up as well.

Kelvin Grove Market co-ordinator Peter Hackworth says the increased popularity has a lot to do with increasing health and environmental concerns.

“A lot of families are buying organic – especially families with young children, who don’t want to buy things with chemicals,” she says.

“Produce markets are the thing of now … people are able to buy food that is much cheaper and fresher.”

Many produce markets take place most weekends across Brisbane, and Rocklea holds a twilight market every Wednesday night.

Check Our Brisbane for more information on most markets held across the city.