Labelling the Sunshine Coast as a ‘third world’ economy, the President of the Queensland Chamber of Commerce and Industry, David Goodwin, has rallied with Sunshine Coast business owners for council to restore sustainability.

Mr Goodwin said the Sunshine Coast is now one of the worst performing regions in Queensland.

Division 2 Councillor Tim Dwyer is responsible for growing areas including Caloundra  and agrees with the views held by Mr Goodwin.

“We here on the Sunshine Coast are not sending out the right message,” Cr Dwyer said.

“I think we’ve got some great long-term vision but you want to work in the short term to get action,” he said.

Cr Dwyer said the regional council must form a partnership with business owners in order to bring the coast forward.

“We have to think more about how we can work with our partners here on the Sunshine Coast being small business large business, the development industry, the tourism industry and start treating them like partners not as if they’re just another entity here on the coast working in isolation from us,” Cr Dwyer said.

He believes the council should act now instead of thinking long-term in order for the Sunshine Coast to economically bounce back.

“The vision we’ve got is for long-term outcomes and I think we’ve dropped the ball with regards to making sure we look to things to drive our economy as we look towards our ultimate vision which is to be the most sustainable region in Australia,” Cr Dwyer said.

Fellow Sunshine Coast Councillor Jenny Mckay disagrees with her colleague saying the council is doing all they can to restore the business sector.

“We are looking at inviting any business in and across the region that would like to do business here. 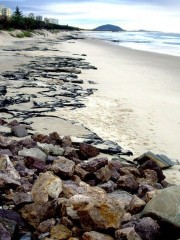 “I don’t believe we are a third world economy but if we don’t keep pursuing every opportunity well any economy can continue to spiral down,” she said.

Struggling business owners on the Sunshine Coast like copy printer Martin Bushell are demanding council step in before developers take their business elsewhere.

“The council has the final decision and I do think some of the councillors don’t understand the reality of business and would like to live in an ideal world rather than the real world,” Mr Bushell said.

“Business people just won’t wait. They’ll go to Ipswich, Gold Coast or Brisbane or somewhere else if they can’t get into the Sunshine Coast and if it’s their preferred model; then the council should be bending over backwards.

“You can’t just stagnate business and think it’s all good and it’s going to look nice and green and lovely; you’ve got to have some business to make the economy work otherwise we’ll end up as one large retirement village,” he said.

The business community has raised their voices in unity in order to be heard by the council.