Over 150 people braved Brisbane’s wet weather to protest the prosecution of Cairns couple, Tegan Leach and Sergie Brennan, and to call for the decriminalisation of abortion in Queensland.

Simultaneous rallies were held in Melbourne and Sydney in what was described as “the strongest show for abortion rights around the country in over a decade”.

Protest organiser, Kathy Newnham from the Pro-Choice Action Collective, said the rallies were part of a National Day of Action to support the Cairns couple and to protest Queensland’s archaic laws.

“The Cairns couple will know from these rallies that thousands of people across the country are with them and they are not alone,” Ms Newnham said.

Ms Newnham said the rally was the start of the next stage of their campaign.

“While the trial will soon be over; our fight is far from done.”

“The anti-abortion movement is getting more organised and we have to intensify our fight.”

Ms Newnham said when women talk together about abortion it breaks down the stigma and shows them they are not alone in their situation.

“The myth of abortion being unpopular is designed to bully us into silence,” she said.

“Anti-abortionists would send women back to backyard abortions because they want it banned altogether.”

“But they’ve never controlled us and they never will.”

Cherish Life State President Teresa Martin would not comment on the Cairns case but said the law had an educative and protective role in society.

“The law educates people by its stance that the unborn are to be protected and it is also a thin veneer of protection for women who do not want to break the law,” Ms Martin said.

“We want the current law to remain in place as a statement of the worth of the unborn and as a protection to women against the pressure to abort.” 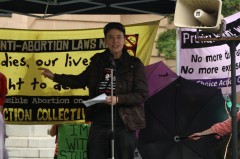 Ms Martin said nothing good could come from legalising abortion.

“Once we allow the killing of the unborn, through the natural progression of those pushing for this law, soon it would become an effort to remove from the planet those babies already born who perhaps aren’t perfect in the eyes of the world.”

The rally was gatecrashed by six pro-life supporters who stood next to the stage holding banners saying: “Thank your mother that you weren’t aborted.”

Pro-choice campaigners blocked the signs with umbrellas and counter-protested with their own signs reading: “I’m with stupid” pointed at the pro-life protesters. 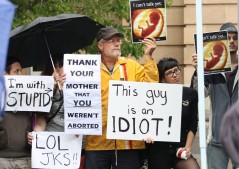 Rally supporter, Ellen Mackenzie, said she found the exchange between the campaigners amusing.

“It was a very clever way for the girls to counter-protest a protest,” Ms Mackenzie said.

Five police officers were on hand in case of violence but the protest was peaceful on both sides.

“Everyone is entitled to their own opinion of course,” Ms Mackenzie said.

“I think both sides were quite respectful of each other.”