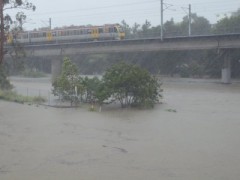 The annual Wilson HTM Brisbane to Gold Coast Cycle Challenge has been cancelled because of heavy rainfall and extreme weather forecasts across Brisbane.

The event, now in its sixth year, raises much needed funds for Diabetes Australia and Heart Foundation research.

Organisers of the charity cycle, which was scheduled for Sunday October 10, 2010, announced the event would be postponed due to the recent near-record rainfall and forecast flood warnings issued by the weather bureau for most of South East Queensland.

A spokesman from Bicycle Queensland said it was aware of the great disruption and inconvenience the postponement has caused.

“After consultation with police and other stakeholders, Bicycle Queensland has taken this step for the safety of participants. The decision to postpone has been taken with great reluctance as we are mindful of the disruption to all riders, volunteers, and contractors,” he said.

Since 2005, the event has seen almost 30,000 participants, and Bicycle Queensland announced all current entries will be valid for the new date.

“It is hoped that a new date will be set within a week,” he said.

“All current entries will be valid for the new date, provided all rider kits including bib and wrist bands are retained.”

Benjamin Doolan was registered to take part in the event and says it is unfortunate the weather has affected the race.

“I think the weather would have made for a more interesting and challenging ride, but there are a lot of younger and less experienced riders participating and organisers did the right thing to postpone the race,” he said.

“Obviously it isn’t just the riders who are affected, but all those who volunteered to help out will need to reschedule.”

Mr. Doolan says that although a new date will need to be found this will not deter participation.

“If last year is anything to go by, the event is raising money for a good cause and people will support the event even if it doesn’t fit in ideally with their plans,” he said.

Organisers have noted that any current entrants, who are unable to participate on the new date, will be able to transfer their entry to another rider at no additional cost.