Australia has banned pesticides containing Endosulfan after countries like the U.S and Canada removed the chemical from shelves earlier this year. 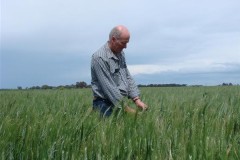 Australian farmers will no longer be allowed to use pesticides containing Endosulfan. Photo: ABC online

More than 60 countries have discontinued Endosulfan products after research showed it had a negative impact on ecosystems and the health of farmers.

“Endosulfan has been banned by a whole range of different countries progressively over a number of years,” she said.

“The United States and Canada acted to ban it this year and Australia is now catching up.”

Health Risks to Farmers and Ecosystems

The United States Environmental Protection Agency banned the chemical after deciding it posed an unacceptable risk to the neurological and reproductive health of U.S farmers.

“There hasn’t been a lot of research conducted in farmers in Australia but those human health risks have been recognised around the world,” she said.

The Australian Pesticides and Veterinary Medicine Authority (APVMA)  regulates pesticide chemicals in Australia and is responsible for the ban.

“These effects are not dramatic but over a long period of time they are likely to lead to chronic effects on some aquatic communities,” he said.

He also said the chemical was no longer popular in the agricultural industry meaning farmers should not be affected by the ban.

“We believe at the moment it’s not used very much at all,” he said.

“Farmers use as little chemicals as they can because of the cost on the bottom line,” he said.

“Banning products, removing the options form the market place, sometimes just increases the cost of production and that cost can’t be passed on to consumers.”

Regardless, he said some farmers still use Endosulfan products out of necessity.

“Some of those crops and farmers rely on Endosulfan  because of a lack of other choice rather than that being the primary chemical they would use,” he said.

More Chemicals to be Banned

Ms King said there was a number of dangerous chemicals still available for purchase.

“Getting rid of Endosulfan is not the end,” she said.

“The APVMA has been reviewing the safety of at least nine chemicals for more than thirteen years…. we have a long way to go.”

Mr Galligan said removing some of the chemicals listed would be unnecessary.

“Farmers have been asked to implement tighter restrictions on the way they use chemicals under review,” he said.

“It’s not like nothing happens in a review phase. If there is cause for increased restrictions the federal regulator can call for those and farmers need to comply.”