The joint State and Federal Government funding will be used to assist the relief and recovery effort in flood damaged areas of South-East Queensland.

A month’s worth of rain fell in only a few days.

Emergency Services Minister Neil Roberts said the current damage bill was estimated to be over $9.5 million dollars and expected to rise over the coming days.

“The South Burnett, Somerset, Lockyer Valley and Toowoomba regional councils and Brisbane City Council have advised of damage to essential public assets such as roads and bridges caused by the heavy rainfall and associated flooding,” Mr Roberts said.

“For that reason I have approved the activation of the Natural Disaster Relief and Recovery Arrangements for these council areas.

“These councils will be able to access State and Federal Government funding to cover the cost of counter disaster operations and the restoration of public assets.”

LNP calls for wet weekend to clean up

Mr Langbroek said the weekends would allow Queensland homeowners to clean up from the recent storms and flooding without the threat of being slammed by large water bills.

“The government should be giving Queenslanders some relief from high excess water charges and a chance to clean up,” said Mr Langbroek.

“South East Queenslanders are now used to water restrictions — one wet weekend won’t blow these habits out of the water.” 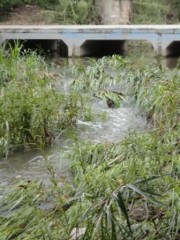 Queensland Police and the State Emergency Service (SES) are advising motorists to heed road closures and not to attempt to cross flooded roads.

They warn that even a small amount of water is enough to sweep a large vehicle off the road.

Police are also urging parents to ensure their children do not play in flood prone waterways, receding water and drains as water levels can rise quickly.

Residents of flood damaged areas suffering from hardship as a result of the flooding should seek assistance from Department of Communities by calling 1800 173 349.