The 13th annual Brisbane Markets’ charity auction took place yesterday with the first tray of this season’s mangoes selling for $50,000, the highest bid made at the auction in over five years. 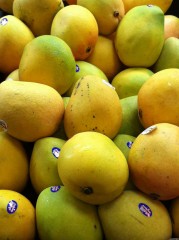 Carlo Lorenti, the owner of Clayfield Markets Fresh, purchased the tray of twelve Queensland mangoes for approximately $4,166 each.

This is the third year in a row that Mr Lorenti and his wife, Susan, have out bid rivals, with Mr

Brisbane Markets’ spokeswoman Amy Kearns says, “We had a number of bidders and they pushed him [Mr Lorenti] up to $50,000 this year.”

Mr Lorenti’s bid has been the highest made at the auction in over five years and has sparked hope that the financial crisis is finally over.

Ms Kearn continues, “It’s been a tough year and we’re just so ecstatic we got this amount.”

James Wile, who was present at yesterday’s auction says, “This morning has been incredibly successful. The mango auction is a great way to raise money for two very worthwhile causes.”

The Brisbane Markets’ charity auction has raised over $500,000 in the past thirteen years.

Mango fervor continues in Brisbane this weekend with the Mango Madness public market being held on Saturday.