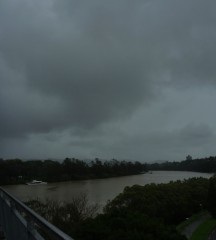 Locals have experienced the first of many La Nina events forecast this summer, the latest weather bringing 100 km/h winds,  flooding and power cuts across Brisbane.

Senior forecaster for the Brisbane Bureau of Meteorology, Brett Harrison said the weather we have experienced this week is something we should get used to.

“High winds and generally wetter than usual weather is to be expected over the summer.”

The  La Nina weather cycle occurs every six years and affects the  east coast of Australia.

The town of Kilcoy was cut off for almost 12 hours as flooding blocked the D’Aguiliar Highway late on Monday night.

More than 150 motorists and tourists were stranded east of Kilcoy, with many unable to get through until as late as midday Tuesday.

“Some people spent the night in the Town Hall, while many motorists preferred to camp out in cars and wait it out,” a police spokesperson said.

Early on Tuesday morning police were unsure when the highway would be reopened and were relying on the rain to cease before taking further action.

“Unfortunately there is more rain forecast this afternoon which could mean more flooding so we don’t know how long people will be stranded for, we really just have to wait for the water to stop” the police spokesperson said.

Police report that nobody was in any danger.

The clean up around Brisbane is well underway with rainfall and floodwaters easing , the State Emergency Service said.

State Emergency Service (SES) crews worked through the night on Monday to clean up in the Moreton Bay area. However, with more rain due this week it is unclear how much will get done.

“We’re continuing to monitor the situation, but about 140 SES volunteers remained on the ground [Monday] night in Brisbane City and Moreton Bay Councils,” an SES spokesperson said.

The SES received more than 650 jobs in southeast Queensland in 24 hours earlier this week, and despite  weather conditions easing now they are urging people to avoid driving, walking or riding through any flood waters they may come across in the area.

“Storm damage, sandbagging and leaking roofs have been the majority of the call outs,” the SES spokesperson said.

“Even though conditions are easing, we don’t know the full extent to some of the flood waters around northern Brisbane.”

Several roads were cut by rising floodwaters and power was out after rains dumped up to 300 mm in some areas over the weekend.

Many roads opened up on Tuesday afternoon, but roads in the Brisbane suburbs of Mt Crosby, Clayfield, Petrie and Brookfield remained closed until late on Wednesday, according to Traffic and Travel Information, Queensland.

Winds up to 100 km/h ripped tress from branches and pulled down power lines, keeping Energex crews busy as they restored power to up to 2000 homes during the latest storms.

Energex reports that most power has been restored in Brisbane but there are still over 72 residences in the Sunshine Coast region that experienced power shortages due to the storm as late as Wednesday.

The  Bureau of Meteorology said Brisbane received 92mm of rain since 9am Monday morning and forecasts suggest that while rain may ease by Thursday, the weekend may see another thunderstorm.