Students gear up for motorsport success

The Queensland University of Technology’s official Motorsport team is gearing up to compete in the annual Formula Society of Automotive Engineers (FSAE) competition, in Melbourne this December. 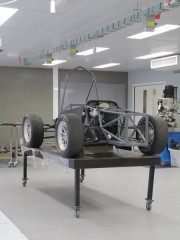 A student run project which comprises 30 members from throughout the university, QUT Motorsport groups together students in engineering, design, business and journalism, who all share a similar passion in the automotive industry.

With the FSAE competition less than two months away QUT Motorsport has a brand new car with modified designs from previous models and a brand new eagerness to outperform their successful fourth placing last year.

After his first year of being in Motorsport Damian Rawle a second year engineering student, says he has no plan on quitting describing the FSAE competition as the highlight of his Motorsport experience.

After discovering he had common ground with QUT, Mr Rawle joined the team in April 2009 and is now in a leading role as chassis team head.

“A massive interest in cars and a hunger to know all about how they worked was my main motivation and it sounded like the perfect way to do exactly what I wanted while also relating it to my degree,” he said.

“But it’s all the little things that you learn in the process that you would never learn doing a degree.”

Academic Advisor Dennis De Pellegrin says that as a member of staff for mechanical engineering, joining Motorsport was an ideal way to use his experience and knowledge to help students strive in their studies.

“The greatest reward for me is to be part of a successful team enterprise,” he said. 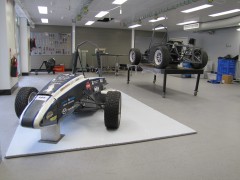 “I also get to witness the development of students through their participation in QUT Motorsport from fresh-faced teens, to competent young professionals.”

The behind the scenes work which goes into completing the car keeps the team well preoccupied throughout the year and with competition looming, the pressure builds as everyone races to get the job done.

Juggling their university studies along with work and motorsport is one of the struggles that they face being a part of the team.

“Combining motorsport, work and a university degree isn’t easy…it takes a lot of organisation and the ability to anticipate when work is going to start coming up,” Mr Rawle said.

“It’s very easy to put all of your effort into motorsport and forget about your degree because you have all the motivation in the world for it.”

The satisfaction of seeing a design modelled on a computer evolve into a real object and then being able to race the final product in Melbourne, is what fuels their success.

“It really is amazing how things get done, everyone pitches in to help when asked…giving up is never an option for fear of letting down the team,” Mr De Pellegrin said.

Technical support staff Anthony Morris agrees describing the project as an accelerated learning experience not only developing the students’ education, but also their leadership and team work skills.

“Whether the team are in the middle of a fierce disagreement or celebrating a breakthrough, the feeling is usually electric,” he said.

The car can be described as a mini Formula One or Formula Ford car which uses the engine from a motorcycle and will compete in a series of tests against 23 other universities.

The SAE is a non-profit organisation which aims to promote automotive-related technologies to the public, while providing the development of self improvement and education to its members.

Being his fourth year of judging at FSAE Simon Holt says the competition is fiercely competitive, but important to those who are pursuing a career in the automotive industry.

“It shows the basic elements of what is required to work within the motorsport environment,” he said.

“Working long hours, solving technical issues where there may be no precedent and essentially devoting your life to the cause.”

With all the opportunities that Motorsport presents the students who participate, Mr Rawle has said there is one downfall.

“We’re mostly studying engineers, so naturally we love explaining all about how things work, but we don’t know many female specimen,” he said.