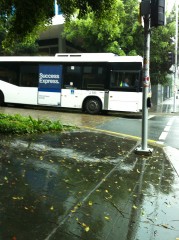 Attacks on Queensland bus drivers have increased over the past years. Source: Alicia Ng

The idea came to him after noticing an increasing amount of attacks on Queensland bus drivers.

In the past financial year there were 79 recorded physical assaults.

“It’s unfortunate just how regular these attacks are,” said a bus driver who wishes to remain anonymous.

“Sadly it’s only the physical incidents that really get any notice.

“Most of us put up with verbal abuse on a daily basis and it’s not right.”

Mr Williams saw the rising attack rate to be an important issue.

“There is quite a considerable amount of bus drivers who have been assaulted, some quite seriously,” he said.

“And unfortunately it’s becoming too common for these assaults to be taking place, particularly on drivers in the Sunshine Coast area.”

“It’s something that I thought would be important that we involve and inform people on a higher level,” he said.

“It’s a figure of concern and one which deserves the co-ordinated attention of government departments and the Transport Workers Union,” she said.

“The new committee will have a common purpose as the safety of bus drivers and staff is a priority for the government and union.”

They recently held their first committee meeting in Parliament House.

The committee discussed their concerns and are looking at ways to prevent attacks.

“The thing I’m very concerned about is if a bus driver is assaulted while driving a bus,” Mr Williams said.

“He could be assaulted from behind, and we have had these attacks.

“The driver could swerve off the road into oncoming traffic or down an embankment and a lot of people could be seriously injured of for that matter killed.”

One idea that the committee is currently discussing is the reintroduction of conductors.

“I know it’s an extra cost but you can’t compare that extra cost against the lives of many people,” Mr Williams said.

Spokesman for Community Action for Sustainable Transport Tristan Peach says he supports the committee and their ideas.

“I think this could be one of many improvements that should be made into the working conditions for bus drivers,” he said.

The committee has only had one meeting so far, but Mr Williams is eagerly looking forward to the end results.

“The aim is to make sure we have input and we work together to put in place some sort of procedure to make life easier and safer for all concerned,” he said.

“We want to make sure that we try to eliminate these accidents.

“We’ve got to make the place safe for them (passengers and drivers) and we’ll work continuously with all those people on the committee to make sure it’s a safe situation.”