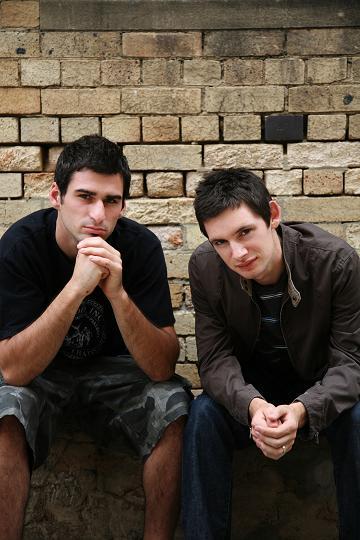 BroadKast with Kaleo on the right. Source: MySpace

“Oh there’s like this skinny kind of white guy, what’s the deal?”

This skinny kind of white guy is known to the most passionate of hip-hop lovers as Kaleo but to the 1,700 kids of Kenmore State High School he is known simply as Gibbsy.

Physical education teacher Lachlan Gibbs, 27, is one of two members who make up Brisbane hip-hop crew BroadKast and with the help of mate Marty “Mastermind” Begbie they’re giving listeners a reason to sit up and tune in to their radios.

When it came to picking his hip-hop alias Gibbs was drawn towards the beauty of the Greek language and the word meaning “to be called or to be summoned”.

To him he says it’s like a calling to being involved with hip-hop and to be writing hip-hop music- something he’s been doing since he was 17.

“Just as I’d feel called to play soccer or football or to be a teacher or to educate or to be a good husband, it’s just something that I felt strongly and passionate about,” he said.

The BroadKast boys were originally a little bit apprehensive about the reception they would receive from the public and especially that from the underground hip-hop community.

So far however they’ve been pleased with the openness and dedication of the listeners.

“It’s cool because the first experience people get of you on stage is, ‘oh there’s like this skinny kind of white guy, what’s the deal?’” he said

“So there’s obviously a bit of reservation to begin with but when they hear your music and your skills on the mic they usually turn around really quick and the response has been really good.”

Apart from his skills behind the microphone Gibbs is also a talented juggler as he switches from the lights and excitement of the stage to the busy schoolyard of Kenmore High in Brisbane’s west.

Gibbs has been teaching physical education at the school for around the past six years and has received recognition for his quality teaching with a nomination in the NEiTA Inspirational Teaching Awards in 2008.

This inspiration is rubbing off on even the toughest of his students with his hip-hop workshops popular among young fans who find it hard to connect with school.

He believes it’s these kids who benefit the most from their teacher being a hip-hop artist.

“It just blows people perceptions and their ideas of what a teacher is because not many kids think that their teacher can live a second life in terms of doing hip-hop,” he said.

Year 11 student Jessica Breakwell is more than just a fan of her teacher’s music and like many of her fellow students she’s also a fan of his teaching.

“I think it is cool that Mr Gibbs is in a band because he is one of the friendliest teachers at the school and it is great to see that he is able to express himself through his music,” she said.

“He is also a terrific role model and I would definitely consider buying his album not only because I want to help support him but his songs are upbeat, inspirational and provide positive messages to the listeners.”

There is little competition when it comes to his biggest supporter though and wife Laura proudly holds the number one position.

The couple met in 2003 while travelling in Tasmania with a musical theatre company and were married two years later.

Laura, a classically trained musician, pianist and contemporary singer, says it was a textbook case of opposites attract.

“Our differences in musical tastes have given us a greater appreciation for each other’s art forms, as we have such different skill sets but thoroughly enjoy watching each other perform in our different genres,” she said.

This full-time teacher and part-time hip-hop MC has all fingers crossed their album “Clearing the Air” will be successful and if it is he plans to take BroadKast on a national tour, possibly putting teaching on a temporary pause.

Although Gibbs’ students know him as a dedicated and gifted teacher his other side Kaleo, the self-proclaimed “skinny kind of white guy” has little trouble hiding where his true passion lies.