Showcasing the future of politics 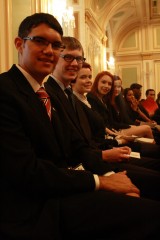 Ninety-two members of the YMCA Youth Parliament took over the Queensland political headquarters last week to show the State Government how it’s done.

Representatives aged 15 to 25 from each of Queensland’s 89 state electorates debated policy issues relating to young people and judging by the intense debate on show at Parliament house the future of politics is in good hands.

Aspiring politicians came head to head on a diverse range of issues including the school curriculum, obesity, agriculture, daylight saving and the controversial issue of women serving in the front line.

The young parliamentarians argued each side of important topics, ensuring most passed, but were equally split over the contentious issue of women in front line defence.

“The Youth Parliament has been providing an apolitical environment where young people can engage with community issues for more than a decade,” he said.

“I think the government needs to take an active role understanding that young people are going to deal with these issues and they need to actually invest in young people and get young people engaged in the political process.”

The future leaders are shaping up to fill big shoes as government MPs and officials forward on their wisdom as they mentor the young parliamentarians.

Karen Struthers, Queensland Community Services Minister, was also there to pass on some of her experience to the political rookies and says it’s a powerful way for young people to learn about democracy in action.

“We’ve got to actually reward young people for their efforts and encourage them to have their say and Youth Parliament is one of those very important opportunities,” she said.

“Through the debates, we’re learning about what young people think about issues important to them.”

In the Legislative Assembly of Queensland’s Parliament House youth members argued for and against the eight Youth Bills they felt needed to be tackled.

The passed Bills, recorded in Hansard, are signed by the Youth Governor and passed to the state Government for consideration. 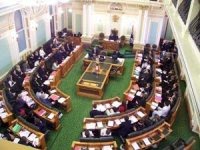 Members of the YMCA Youth Parliament have mixed opinions over the Queensland Government but agree more should be done to include the needs of young people.

“I think that needs to be extended to up skilling young people who don’t want to go to uni,” he said.

Member for Lytton Ellen Desmarchelier believes it is important to know about the political process, and the State Government should listen to younger generations.

Torres Webb, representative for the Torres Strait region, points out the government has done a lot in terms of giving a voice to the people of Torres Strait but could do more to ensure their future success.

“Economic development, job opportunities and training are really important for our people to succeed,” he said.

In the next coming weeks members of the YMCA Youth Parliament will again come together to look back on their recent debates and forward their concerns to key decision-makers of the State Government.