The Federal Labor Government has announced a plan to return compulsory union fees for tertiary schooling.

Under the new laws students will pay up to $250 for university services such as counselling, financial help and sport.

“I ‘m not aware of any university that wouldn’t be supportive of this legislation,” she said.

The NUS has said a student levy would stop universities cutting into learning expenses. Photo courtesy of Getty Images

“In fact Universities Australia, which speaks for most of us, has applauded the legislation.”

“What you see is the university being forced to take money out of teaching and learning to prop up student organisations,” he said.

Mr Butchers said students were not considered when the fees were removed in 2005.

“At the end of the day while the politicians were bickering vital services disappeared and students were much worse off for it,” he said.

“These changes will hit poor university attendees the hardest,” she said.

“It is not the student that works three part time jobs to get through uni that has the time to laze around and drink subsidised beer on campus.

“Similarly, a single mother studying a nursing degree should not be paying for the activities of a university ski club.”

Miss Uher also said the funding would mostly support unions who do not need the money.

“Student unions push a political agenda before the needs of actual students” she said. 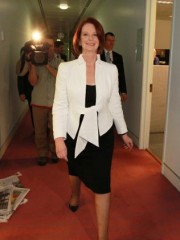 Prime Minister Julia Gillard is using the new dynamic of the 43rd Parliament to revert the changes to student services made by the Howard Government. Photo courtesy of Getty Images

“With the Labor Party now being led by former Australian Union of Students’ President Julia Gillard it is not surprising that they are yet again legislating for their own tribe.”

But Mr Butchers said rural universities had been particularly disadvantaged in the last five years.

“One of our core principles is supporting the student journey,” he said.

“We don’t just let students flounder on their own we make sure they’ve got someone to turn to and help them along the way.”