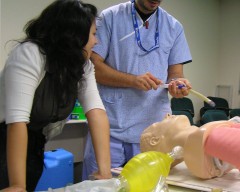 The National Rural Health Alliance (NRHA) says a shortage of medical internship placements means an improved “pipeline” is needed to make sure training is available for student doctors to work in rural Australia.

NRHA chair Dr Jenny May says while she is keen to see more doctors in rural areas, she is mindful of the need for appropriate supervision.

“One of the difficulties in providing such supervision is that doctors, nurses and other health professionals working in rural areas are in an environment where clinical needs are high,” she said.

“Devoting time and effort to teaching is actually quite difficult … [therefore] rural practice is not suitable for first year postgraduate medical students unless suitable supervision can be organised.”

Dr May says although the NRHA is happy to see an increase in general practitioner (GP) training, internships and graduate training are also needed in specialist work.

“[We need graduates] to do anaesthetics, for people to do surgery and provide intensive care, because that is the sort of skills we need for people who are living in rural Australia,” she said.

The Australian Medical Association of Queensland (AMAQ) also says the national shortage of medical internships has severe implications for the future workforce to meet the health care needs of a growing and ageing population.

AMAQ president Dr Gino Pecoraro said in a media statement there were not enough supervisors, infrastructure, and other resources to train the students and graduates.

“Unless we devote more resources to medical training after medical school, we will not solve our doctor shortage despite increasing medical places,” he said in the statement.

However, Dr May is optimistic about Federal Labor’s recent deal with the independents that pledges regional Australia gets a 30 per cent share of the number of infrastructure programs that are health related.

She says these programs involve hospitals having more rooms for beds, increasing the number of GP clinics and increased allocation of funds to Aboriginal community-controlled health care services.

“The period between increasing the number of medical students and expecting to see an increased number of doctors in the bush is probably a 15 year undertaking, so the lead time on these [government] initiatives is long,” Dr May said.

“I think it would take a good package and incentives to keep well trained people in the bush.”

She says three factors are involved in retaining doctors in rural areas.

“[Secondly], the spouses or partners’ needs [and] access to schooling and employment.

“[Thirdly], attraction to physical geography of the place and cultural barriers … some people might not be used to small communities.”

Albert Jung, a final year medical student at the University of Queensland (UQ), says he would consider a rural placement if it meant him being in a job or not.

He is an international student from Canada and says he has invested a significant amount of money in his four years of medical education at UQ.

“If given the choice of a metropolitan or rural placement, I would have to honestly say metro, as I am married and have family commitments to consider,” he said.

“Unfortunately even if you want to go rural, for example Mount Isa or Alice Springs, they do not have the infrastructure in place for postgraduates year one [first year of internship right after leaving medical school].

“[But] the biggest challenge at this time is not whether to go rural or not, but not having spots for internships.”

Mr Jung says third year medical students in UQ are required to do a rotation in a rural setting and he did his rotation in Ayr, a town an hour south of Townsville in north Queensland.

“The problem is if you go too rural, they do not have the infrastructure so surgeries have to be done at another hospital.”

The Australian Medical Association (AMA) held a medical intern summit in Canberra on September 29, 2010 where discussions included developing solutions to the shortage to pass on to government.