‘Parklife’ heads back to Brisbane

The first music festival of the summer season ‘Parklife‘ has made last-minute plans to move back to its original location of Brisbane’s Botanical Gardens.

This has caused problems for event goers as many have booked accommodation on the Gold Coast for the nights surrounding the event.

Within a month of its scheduled date, organisers said that ongoing roadworks around the Gold Coast venue were too risky for those attending the festival. 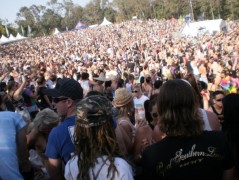 Event organiser John Wall said the decision was given a more positive reaction than expected.

“The Gold Coast is a great venue for an event such as this, which is why we chose to move it there in the first place. We were afraid of the backlash from ticket holders but so far the announcement has been received quite well.”

Ticket holder Troy Lee says the move has made the experience an inconvenient one to say the least.

“Not only is the ticket $150, but I then went out of my way to book a hotel on the Gold Coast which I really couldn’t afford. The hotel is refusing to give me a refund meaning I am down at Surfers for no reason at all.”

The average hotel price on Wotif.com for the night of the event is $200.

This is advertised at a basic rate, which is non-refundable.

Shift manager at The Marriott Jamie English says unfortunately there is nothing they can do for these patrons.

“This is why more attention needs to be paid to the type of fare patrons are paying for. The budget price is there under a strict warning that the payment is non-refundable.”

“We feel terrible for the kids that have bought tickets, but there is nothing that we can do.”

Event organisers have shuttle buses to transport all of those staying at the Gold Coast for the weekend, but are still not acknowledging the money lost on accommodation.

Event goer Sophie Kamphausen says she will still attend the event but will be sceptical of that decision next year.

“I love Parklife, but this has dampened my view on the festival.”

“This is my third year of attending but will think twice before I purchase my ticket next year.”