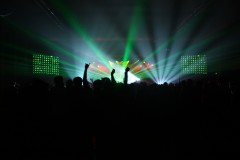 About one thousand teenagers were expected to attend an Underage Dance Party event on the Sunshine Coast on the weekend.

The drug and alcohol free event is held four times a year, with up to 1200 teenagers in attendance at each party.

Event coordinator Tom Turner began running the events in 2008 after recognising a gap in the youth entertainment sector.

Mr Turner solely coordinates the event but enlists a team of up to 55 people to staff, run and supervise on the night.

“During the actual event there’s usually about 15 red frogs, 20 event personnel, 6 police, 2 first aiders and about 10 staff from the [Caloundra] Events Centre,” he said.

The underage event is specifically for students under the age of 18 and all guests are required to show a school student ID to enter the venue.

The youths also have their bags searched on entry to ensure no alcohol or drugs enter the venue.

“We know that kids are drinking before the event but unfortunately there’s not a lot we can do,” Mr Turner said.

Police presence is designed to deter underage drinkers from attending the event and first aid staff and Red Frog volunteers are present to assist with providing support.

Red Frog volunteer Dominique Hetherington says the role of the Red Frogs at the dance party events is vital in providing the youths with support and guidance.

“Our presence reassures the parents that when their kids come to dance parties that they’re safe and it makes it much easier for the police”, she said.

“All we can do is reassure parents that while we can’t stop what they do outside the party, once they’re in the venue they’re in a safe environment.”

Sunshine Coast parents are supportive of the initiative.

“Parents often ask me why the events are held so far apart,” Mr Turner said.

The Sunshine Coast events are also supported by the Queensland Government’s “One Punch Can Kill” anti-violence campaign and national youth depression organisation Beyond Blue.