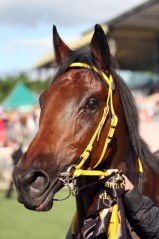 Shoot Out’s regular Queensland-based jockey Stathi Katsidis, was heavily criticised in the media for his ride on the race favourite.

Katsidis chose to stay on the inside running of the tight Moonee Valley circuit, where the track surface had been labelled a “no go” area.

Immediately following the race, Katsidis told reporters he could have made a move early but elected not to.

“I could have got out at the 800 but I thought it was just too soon at that stage; I got a nice run through at the 400 and he battled on really well even though those other horses had the sprinting edge on him,” he said.

“For his first run at the Valley I was very happy with him, there’s a lot of improvement left still.”

“He had a chance to get off the fence at the 800 metres, well why on earth he didn’t take it was way, way beyond me,” he said.

Katsidis defended his decision and said he only has the Queensland star’s future campaign in mind.

“I thought his run was absolutely awesome…I wanted to give him a softer run in transit and I was able to do that,” he said.

“It’s more about looking after the horse and the races coming up and everyone has the right to their opinion but we are all extremely happy with the way the horse is going.

“From a point of view of the races coming up it was an awesome trial for a Melbourne Cup or even possibly the Cox Plate,” he said.

When asked whether he thought Katsidis’ choice to stay the inside was the right one, trainer Wallace said, “You can’t change what’s happened so it’s no good me commenting on that but I’m sure next time he’ll be different…I was happy with his run.”

Shoot Out is set for a re-match with Typhoon Tracy and Whobegotyou when they contest the prestigious W.S Cox Plate on October 23, at Moonee Valley.

“We’d love to win all these races on the way through but I’m supposed to be realistic. You can’t see a horse going on to win a Cox Plate and a Melbourne Cup and winning every race in between as well,” Katsidis said.

Katsidis believes Shoot Out will be “unbeatable” next start in the Group One Turnbull Stakes, over 2000 metres at Flemington Racecourse in two weeks.