Parents of Clontarf Beach State School students want the 60km/h zone on Elizabeth Avenue lowered in an effort to protect their children.

Former P&C Treasurer and the mother of three children who have attended Clontarf Primary, Patrice Pile, said that parents and the P&C committee have wanted to change the speed limit for around 15 years.

“They’ve put forward petitions, and had Main Roads people out, but nothing has come through,” she said.
“They just keep saying that because it’s a main road, the speed can’t be dropped, and because there are lights, you can’t have a lollypop lady.”

Mrs Pile said the school has managed to get one new drop off zone at the front, which many parents like to use.

Janine Cater, whose son has attended Clontarf Primary for seven years, said, “My son uses the crossing mostly every day. I either drop him off just near the crossing or sometimes at the school drop off zone.”

“I think lowering the speed limit is a good idea. It’s an extremely busy road and I know of one child that has been hit,” she said.

“A lot of other parents would agree that a lower speed limit would be a good idea.”

Mrs Pile said the school has put forward the idea of writing on the road saying ‘crossing ahead’, or flashing lights, but nothing has come through. 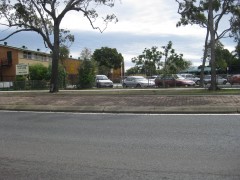 A lot of parents prefer to use the school's drop off zone Source: Caitlin Adams

“Because the speed doesn’t drop, then it’s not marked on the road,” she said.

“It would be different if it was marked on the road that there is a school crossing ahead.”

Mrs Carter agrees, saying there could also be increased police patrols or radars or even an overpass could be built.

“There are plenty more ideas though, even another drop off zone at the rear of the school,” she said.

In an interview with the Redcliffe Herald, Redcliffe District Traffic Branch Senior-Sergeant Garth Peake said it was not practical to have a 40km/h school zone or a lollypop supervisor because Elizabeth Avenue is a major road.

“This is a big picture issue and I think it would be more dangerous than practical,” he said.

“We perform regular patrols around the schools in the area in marked and unmarked vehicles.”

Mrs Pile said the school has a big majority of kids who walk to school and still have to get across Elizabeth Avenue.

“They say they can’t drop the speed because it’s a main road, but if it was marked on the road it would help,” she said.

“You just need that extra bit there, so that people are careful.”