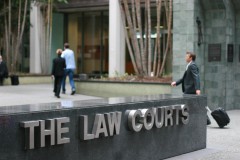 Mr Keenan was sentenced for drug charges at the Supreme Court.

Francis Robert Keenan, 38, was arrested in Carrara on February 25, 2008, after police found an excessive amount of illegal drugs where he was reportedly staying.

Two grams of methamphetamine, small amounts of cocaine and steroids, as well as syringes were also discovered.

Police discontinued their arrest until DNA testing on the backpack led to his rearrest.

Two other people also living with Mr Keenan were charged, however Mr Keenan claimed he was the sole owner of the drugs in the knapsack.

The wholesale value of the drugs found at the premises amounted to around forty to fifty thousand dollars in total, with the ecstasy tablets believed to be for clear commercial purposes and the other drugs for personal use.

He served an eight year sentence for manslaughter beginning in 1995, and then a year later he was found guilty of grievous bodily harm with intent in March 2007.

Chief Justice Paul de Jersey sentenced him to life imprisonment over an attack on Darren Thomas Coffey on the Gold Coast in December in which he shot the man five times for allegedly keeping $7000 from him in a drug-related crime.

Mr Coffey was paralysed from the waist down and the High Court reinstated Mr Keenan’s life sentence.

“The unusual nature of the crime is that he was already serving a life sentence, but these offences were committed while he was free,” he said.

“It is not disputed that the quantity of tablets would indicate a strong commercial purpose.”

Mr Keenan was not under any court order at the time of his arrest for using and trafficking illegal drugs.

Mr Keenan was sentenced to four years imprisonment, with one year for each count of possessing dangerous drugs to be served concurrent with his present term.

If he had not been on a life sentence, he would have been allowed 12 months parole from today.