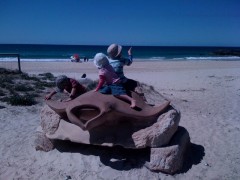 Huge crowds were expected this weekend to see a giant sandstone stingray and 54 other sculptures at Queensland’s biggest outdoor art exhibition.

The eighth annual Swell Sculpture Festival features major artworks on Gold Coast’s Currumbin Beach and Premier Anna Bligh says it is “one of the world’s most beautiful coastal galleries”.

“It’s gone up every year and it doesn’t feel as though there are any less people this year,” he says.

Local resident Kandy McCouat says the secret to Swell’s success is the accessibility of the art, both physically and conceptually.

The sculptures are not fenced and can be viewed 24 hours a day, therefore allowing the audience to set the rules about when and how they see them.

“What I love most is the freedom to explore a creative landscape of meaning and connection on lots of levels,” says McCouat.

Having been involved with the event as a former volunteer, sculptor and now visitor since its inception, McCouat says the outdoor art gallery inspires the imagination of the whole community.

“I enjoy touching and being able to interact closely with the sculptures and share the experience with family and loved ones,” she says.

Although the event was smaller in the first years, with around 6,000 visitors and 14 sculptures to view, Swell’s premise has always been to ‘get art out there’.

“The best thing for me is the access it gives everyone to the art. [At other times of the year] we sit in the gallery and watch people walk past and they don’t come in,” he says. 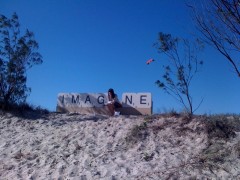 Many of the sculptures at Swell are designed to include the audience, such as imag_ne, by Victorian artist Emma Anna, where the missing ‘i’ is a space for someone to sit in.

Sharing in some of the $60,000 on offer to artists is Queenslander Daniel Gill, whose stingray sculpture, Swoop, was purchased by Gold Coast City Council for $20,000.

Local and state government, as well as local businesses, support Swell and organisers say it will soon be cemented in the cultural fabric of the Gold Coast.

“It’s not quite an institution yet but it should stay on the calendar … the sculptures speak for themselves,” says Mr Plumb.