Ball Park Music were finishing their set as Mr Cromack climbed a set of two-metre high speakers for their grand finale.

Mr Cromack said he felt the desire to do something outrageous and climbing the speakers was it. 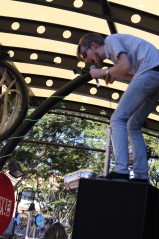 “Regardless of the music an audience always remembers a band that goes absolutely nuts at the end of their set,” Mr Cromack said.

“I wanted people to go home and remember who we are.”

“He got to the first speaker and I thought that’s okay,” Ms Boyce said.

“But when he climbed higher I just couldn’t look.”

“He climbs something at pretty much every gig but this time I was thinking I don’t want a broken Sam.”

Mr Cromack continued to perform as he stood on the highest speaker, leaving security guards uncomfortable.

“I think the security guard was overwhelmed by the whole thing,” Mr Cromack said.

“He just wanted me to get down so he was pulling on the microphone cord.”

“There was no way he was going to climb up there to get me.”

Mr Cromack said he didn’t really know how he was going to end it.

“You can’t just get up there and then resign from what you’ve decided to do,” he said.

“If you do something outrageous; you have to be outrageous until the end.”

Mr Cromack finished outrageously by throwing his microphone to the security guard, jumping off the speakers over a barricade and running through the crowd.

Audience members lapped up Mr Cromack’s escapades and cheered him on. 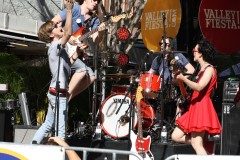 Crowd member James Stevens said it was the highlight of his Valley Fiesta experience.

“It was completely unexpected and that’s what I loved about it,” Mr Stevens said.

“I was standing right in front of the speakers and when he jumped off I caught it all on film.”

The security guard approached Mr Cromack at the end of the gig.

“He came to give me a what for,” Mr Cromack said.

“He said it wasn’t my property and I could have wrecked Valley Fiesta for everyone.”

The security guard did not wish to comment on the incident.

Ball Park Music are about to head off on their first national tour supporting The Hungry Kids of Hungary on their Escapades tour.

The first show of the tour is at The Hifi Bar in West End on September 30.