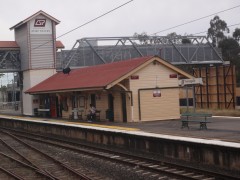 Over 60 Yeerongpilly property owners will be forced to relocate due to the new cross-river rail project.

The government predicts 66 residences will be resumed in order for a new four-platform train station to be built alongside the existing Yeerongpilly station.

The new train station will serve as a tunnel portal for the ten kilometre underground rail line that will service the centre of Brisbane.

Residents of the suburb have not yet been informed exactly which homes will be resumed but they have already expressed their concern over the project.

Sam McWhinney, a resident of Yeerongpilly, says, “I wasn’t aware something like this could happen. Not only are people losing their homes, but the community will be losing its neighbours and friends. No amount of compensation can fix that.”

Louise Wiseman frequently catches the train from Yeerongpilly to the city and sees no problem with the current station. “I work in town so I catch the train every morning and afternoon during peak hour. Yes, it’s crowded but everyone ends up getting on the train. I don’t see why we need another station.”

Minister for Transport, Rachel Nolan, sympathised with the Yeerongpilly locals but said it was necessary to build the new station because the number of trains using the station will almost double in the next six years.

Ms Nolan the Brisbane Times, “By 2016 the number of trains at Yeerongpilly would almost double in the two-hour morning peak period – that’s a train about every 5 minutes bound for the CBD.”

Fairfield, Yeronga and Marooka were among other locations considered for the project. However, Yeerongpilly was chosen as the site because it has the lowest impact on residences.

Ms Nolan said “Yeerongpilly was found to be the preferred location as it provides the best balance between cost, community impact, community benefit and rail operations.”

Public consultation is planned for October and November.