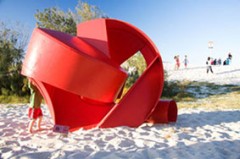 Jeux d’interieur by Janik Bouchette was one of 56 sculptures on display. Photo: Tijana Jaksic

More than 50 sculptures took over the Gold Coast’s Currumbin Beach in south-east Queensland for the eighth annual Swell Sculpture Festival from September 10 to 19.

From life-size to giant creations, the outdoor gallery exhibits the work of local, national and international artists.

Founding Director Natasha Edwards says 2010 has seen the largest display of sculptures yet.

“It spans over a kilometre of beach and parklands at Currumbin Beach,” she said.

“It sets us apart from indoor art galleries by providing an alternative way to explore and view sculpture.”

“It brings it out of the gallery and into a public space, giving artists more exposure,” she said. 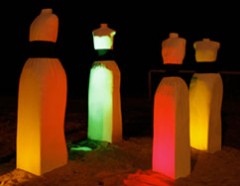 With her sculpture Flirt, Ms Gray says she aimed to create something “soft” and “feminine” out of hebel block so it would last outdoors.

“I used contrasting rope to cinch in at the waist and together with the effect of soft pleats highlight the curves of these flirty figures.

“They’re elegant and fun and a tribute to all of us girls.”

“Each student has made a small bee approximately eight centimetres long,” she said.

“There are about 722 bees altogether, running along the fence for the length of the Currumbin Beach.” 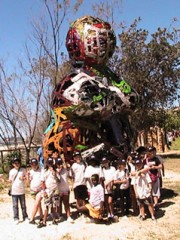 Students from Cloncurry State School visited the festival as part of the Bush to Beach Project. Photo: Tijana Jaksic

The Bush to Beach project made it possible for children from Cloncurry State School, near Mount Isa in north-west Queensland, to also contribute to the project.

A group of 19 children from Cloncurry came to Currumbin to see the festival, participate in workshops and interact with local children.

“It’s just a really good opportunity for them to get out and experience something different – something they’d usually never get to do,” he said.

“A lot of the kids had never been to the Gold Coast and never even swam in the surf.”

Other festival highlights include twilight walks, public art forums, artist master classes and the chance to vote for your favourite sculpture.