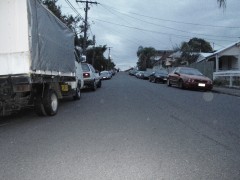 Owner's of older vehicles are being urged to fit engine immobilisers to their cars to decrease theft rates. (Source: Tom Kojrowicz)

In an attempt to clean their record of being two South East Queensland ‘hot spots’ for car theft, this month, the Gold Coast and Logan City Councils are calling on communities to keep their vehicles safe from thieves.

Motor vehicle theft remains an ongoing problem for communities in South-East Queensland, with one in every 70 households suffering from the issue in the past 12 months.

To educate the public on how to keep their cars safe from criminals, two programs are being run throughout September 2010.

One of these is Operation Bounce Back, in its fifth year of operation in Logan and on the Gold Coast.

It is funded by the National Motor Vehicle Theft Reduction Council (NMVTRC).

NMVTRC director of strategy and programming Geoff Hughes says the program is about raising awareness that vehicles at risk are not necessarily the most likely ones.

“What it aims to do is try and get through a couple of very simple messages to those at risk communities, particularly the owners of older vehicles,” he said.

“Lots of people think ‘no one wants to steal my old bomb’ but they’re just the very sorts of vehicles that particularly juvenile thieves looking for short term use will target.

“They can break into them with nothing more than a coat hanger and a screwdriver and it’s those sorts of vehicles we need to protect by fitting an engine immobiliser.”

Operation Bounce Back further provides the chance for owners of an ‘at risk vehicle’ (manufactured before 2001) to win an engine immobiliser to protect their cars.

On the Gold Coast, in addition to Operation Bounce Back, residents have been taking part in another educational campaign facilitated by Queensland Police.

Gold Coast Councillor Margaret Grummitt says the program is being embraced by the community, who are surprised by what constitutes an ‘at risk’ vehicle.

“We’ve had a fairly extensive public awareness program,” she said.

“I think people are realising that they’re getting their cars stolen from their own driveways and their own homes, particularly the older cars because they’re easier to steal.

“I don’t think people realise that’s where they are most vulnerable.”

It seems that while car theft may remain a problem for these communities, we can in fact expect to see the issue fade away.

“Car theft on the whole is reducing over time – that’s to do with the increasing levels of security in new cars,” he said.

But he said while car theft may not be such a big deal in the years to come, there is still a long way to go.

“What we’re seeing is that while new car theft is reducing because they’re harder to steal, the theft of older cars is increasing because they still have a value to a car thief,” Mr Manning said.

All motorists with an at-risk vehicle are urged to fit an engine immobiliser to their vehicle.

According to Mr Hughes, if motorists take part in this initiative current theft rates could decrease by nearly 75 per cent.

“But to get those numbers down further in a hurry we really need to encourage people who own pre-2001 vehicles to take security seriously and fit an engine immobiliser.”