Niche magazines have a growing and devoted following because young women have a greater sense of individuality than previous generations, magazine analyst and journalist Erica Bartle says. 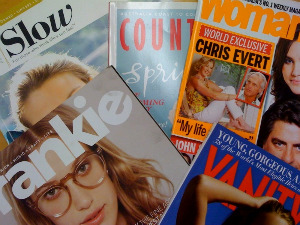 In August 2010 magazine and pop culture blog, Girl With a Satchel, reported a 43.3 per cent circulation increase of the lifestyle niche magazine, Frankie, between June 2009 and June 2010.

Brisbane-based “green fashion magazine” Peppermint says its circulation quadrupled in the two years since its launch.

Girl With a Satchel also reported magazines Cosmopolitan and Cleo had circulation losses of 9 per cent and 10.6 per cent respectively.

Ms Bartle, founder of Girl With a Satchel, said the two glossy magazines were falling because mass marketing to women as one group is no longer effective.

“My generation and the generation below have grown up seeing ourselves as much more individual than my mother’s generation,” she said.

“What we’re looking for now are magazines that appeal to particular interests.”

Sahil Merchant, co-founder of specialty magazine retailer Magnation, says Frankie is still a niche magazine even though it could now be considered more mainstream because circulation has “gone through the roof”.

“I still think of it as a niche magazine because of the passion and the loyalty that Frankie has managed to create,” Mr Merchant said.

“The defining characteristic of a niche magazine is that they tend to generate a lot more passion about their magazine and the contents than the average mainstream magazine would.”

Kelley Sheenan, founder and editor of Peppermint, agreed building a relationship with readers was an important factor in a magazine’s success.

“I think readers have taken to Peppermint so well because they are wanting more from their media,” Ms Sheenan said.

“I also believe that readers want to feel more connected with their media and have it reflect their actual lives.”

Related Link: Girl With a Satchel Mags: State of the (mag)nation – June 2010 circulation