Fuzzy under fire from Parklife punters

The event managing company behind Parklife, Fuzzy, has once again caused upset, this time before the festival has even begun.

Parklife has been moved back to its Brisbane location

Fuzzy announced with less than a month to go that the upcoming Queensland leg of Parklife had been moved.

The 2010 event was originally scheduled for the Gold Coast Parklands but has been changed to the Brisbane City Botanic Gardens and Riverstage.

Parklife punters are calling the last minute venue change a ‘slap in the face’.

Fired up ticket holders have taken to the Parklife and Fuzzy websites and Facebook profiles with angry messages.

The angriest ones appear to be the supporters who had organised accommodation on the Gold Coast and been refused refunds.

They now face losses of up to hundreds and thousands of dollars.

“We sincerely apologise for any inconvenience the move causes to those who have bought tickets,” he said.

“We are so sorry for the inconvenience in regards to booked accommodation as us Parklife crew also have non-refundable accommodation,” they said.

The Office of Fair Trading couldn’t comment on the event change.

However a spokesperson on their behalf offered advice for those considering making a complaint.

“It’s always best for the consumer to try and resolve the issue with the direct company before submitting a complaint to us,” he said.

“Consumers need to be aware and understand their legal rights before issuing a complaint otherwise it struggles to get anywhere.”

Mr Wall explained that Fuzzy would be supplying a shuttle bus free of charge so they could keep their accommodation.

“We will be providing a free shuttle bus right to the door of Parklife Brisbane from Surfers Paradise to ensure no-one who has bought a ticket misses out,” he said.

However punters are still angry.

I’m now $650 out of pocket and I’m sure thousands of other people are as well,” wrote Amy Reed on the Parklife Facebook page.

“And all (they) give us is a shuttle bus to catch.

Many have voiced their frustration with the shuttle bus, saying that the primary reason they booked accommodation was to skip the hour long travel time.

The Gold Coast Council and community are also unhappy with the venue change, which was set to bring in money for their economy.

When contacted, Mayor Ron Clarke said he was disappointed and he wasn’t sure Fuzzy had considered alternative Gold Coast locations to move to.

“We are disappointed but that’s business,” he said.

Fuzzy director and general manager Adelle Robinson said that road works for the new hospital would result in traffic issues for Parklife goers.

The company remains adamant that the venue change was done for the benefit of their customers. 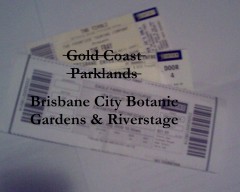 “We’re just concerned that it’s (Gold Coast Parklands) not going to give our customers the Parklife experience we want them to have,” Ms Robinson said.

However it is not just the move that is angering punters.

People who were initially unhappy over the venue change have had their tempers ignited by Fuzzy’s customer service.

“The lack of PR that Fuzzy is providing on the issue is pathetic!” said Georgie Eliza.

“The least (they) could do is personally contact ticket holders to inform them of the change.

“I had to find out second hand!

“I’m very disappointed in the lack of public relations that has been put into ensuring fans are informed and issues are resolved.”

Fuzzy received so many complaints and enquires about the change that they up a specific contact line.

“We have set up a dedicated email hotline [email protected],” said Mr Wall.

Those who made comments and enquires on Fuzzy and Parklife Facebook pages regarding the venue change were told to send an email so the customer service team could help them.

Punters say the email line and customer service is not up to standard.

What she received was an automated response.

“They’ve replied now, saying they will get back to me in seven days,” she said.

Thousands of Brisbane Parklife punters missed out on seeing the headlining acts when the company sold more tickets than capacity for Riverstage.

More tickets were sold than capacity for the Brisbane stages

Laura Jayne missed out on seeing the headline acts and was disappointed that Fuzzy had not informed punters of the maximum capacity issue.

Ms Jayne spoke to a Fuzzy representative at the venue about the issue.

“I suggested to her that perhaps not so many tickets should have been sold. She snapped back asking if I would like the event to be sold out in 15 minutes,” she said.

“The Fuzzy representative continued to be rude and finished with ‘well maybe you shouldn’t buy a ticket next year.’”

Amanda Greer was another person who missed out on the headlining acts in 2009.

Ms Greer alleges that while speaking to a security guard about the issue she was punched in the face.

“I understand it was not a Fuzzy representative. But I still hold them accountable because they chose to hire that security company,” she said.

Ms Greer did not press any charges.

Like this year, let down fans took to the internet to express their disappointment with a ‘Parklife 2009 was officially crap’ forum and a Facebook group called ‘Fuzzy Fail with Parklife 2009!!!’.

“What I saw last year at Parklife was an incident some-what similar to the incident at the ‘Love Parade’ in Germany this year where there was several deaths due to careless organisation,” said Facebook group creator Ash Flash. 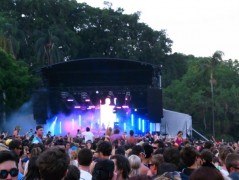 They were further angered when they discovered they all received the same generic response.

The group banded together and took their complaints to the Office of Fair Trading and Australian Competition and Consumer Commission.

However the OFT and ACCC forced the group to attempt to mediate the disagreement with Fuzzy before they would handle the complaint.

The group made Fuzzy aware that if they failed to appropriately address the issue it would be followed up with the OFT and ACCC.

After months of deliberation Fuzzy sent those who had complained an apology email and offered them free tickets for Parklike 2010.

“We finally got feedback outside of the generic email which was from head office Fuzzy stating in a round-about way that they were in the wrong,” Mr Flash said.

“To satisfy us and stop us from taking it further they offered a free ticket to the following year’s Parklife.”

Members of the group were unhappy with the outcome.

Mr Flash said that the complaint failed to go further because Fuzzy was stalling responses and making the process long.

“People started to lose hope and give up,” he said.

Mr Flash said that the process took so long that he couldn’t pursue the issue further as he had plans to move overseas.

“I would have taken it to court but ran out of time,” he said.

“They need to be sued for their recklessness.”