Queenslanders to be hit hard when ethanol mandate comes into play

South-East Queenslanders are expected to struggle with the unavailability of unleaded petrol, as service stations begin to phase out the fuel for the introduction of the Government’s Ethanol Mandate. 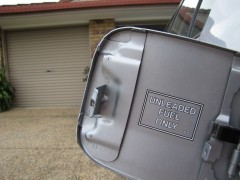 With already 166 petrol stations, predominantly throughout South-East Queensland, removing unleaded fuel from their bowsers, motorists can be expected to travel further for unleaded fuel or pay more for premium.

The mandate, which is expected to be in full swing by 2011, will require that five per cent of regular unleaded fuel be an ethanol blend, meaning that 50 per cent of petrol sold in Queensland must be E10.

Charles Wright, executive general manager of Nuemann Petroleum, said that the issue with the mandate is the limited choice motorists will have, because in order to meet the mandate the amount of unleaded fuel sold in South-East Queensland will be minimal.

“The difficulty in reaching the quota is that while people still have a choice…we can’t force the motoring public to use E10,” he said.

“So while there is still a choice in the market place, we’ve got no control over it, yet we’re supposed to meet the mandate.”

With up to 30 per cent of cars being incompatible with E10 fuel, a large number of people will find themselves having to pay 10 to 20 cents more for premium blended petrol.

RACQ’s manager of vehicle technologies Steve Spalding says that the inconvenience is something the Government needs to consider as it poses a real risk to motorists.

“If drivers find themselves in a situation where it’s becoming increasingly difficult to buy standard unleaded fuel or because their car isn’t compatible with E10, they’ll find it more inconvenient,” he said.

“They may well have to drive around to find servos which carry the right fuel or worse still they’ll have to buy a more expensive premium fuel.”

To accommodate the mandate, service stations will have to make changes to their facilities to ensure their tanks meet the standards in storing ethanol fuel, which can turn out to be an expensive process.

Richard Payne, principle policy director of the Motor Trades Association, said while ethanol petrol isn’t as efficient as unleaded, the environmental benefits will outweigh the negative ones.

“It’s slightly cheaper with a cost benefit of about three cents and also the bio fuel is much kinder on the environment with greenhouse gases,” he said.

“There’s been a little bit of negative publicity but I don’t think it’s going to be a deterrent.”.

With only a small amount of ethanol producers working in Australia, Mr Wright says the pressure to produce more E10 will mean more pressure on ethanol prices,.

“You could actually see an E10 blend being more expensive than unleaded,” he said.

Mr Spalding said in a practical sense, the mandate shouldn’t be forced considering the large number of people with cars incompatible with ethanol.

“We don’t support the mandate, we think it’s the wrong approach,” he said.