There have been fresh calls for a new state of North Queensland, but they have so far failed to gain traction.

North Queensland residents have from time-to-time argued for state secession, but the recent catapulting of Bob Katter into the nation’s attention has helped publicise North Queenslanders’ desire for their own state.

The maverick Member for Kennedy in Queensland’s far north has been a staunch supporter of establishing a separate, new North Queensland state.

Katter has lambasted the State Government for what he believes is its neglect of northern constituents, and referred to the government as the “blood-sucking establishment of the south”.

But attempts to establish a North Queensland state have so far been unsuccessful. 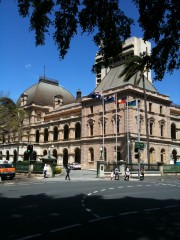 The State Government opposes the idea, and a motion at this year’s conference of the Local Government Association of Queensland (LGAQ) failed to reach a consensus.

“I believe even some of the North Queensland councils believe that it wasn’t in their interest, in an economic sense… they understood they were significantly subsidised by South-East Queensland,” he said.

“People realise that as big as the resource industry is with the 20 per cent share of gross state product, the bulk of the revenue is still derived from the services and business sectors and that flows into direct subsidies for electricity and freight to the rest of Queensland.”

Mr Hallam said the councils with the most votes were from more populous areas of Central and South-East Queensland.

Ipswich Councillor Paul Tully said the motion failed because the majority of delegates did not think it was good for Queensland.

“[Secession] would weaken the existing state and create a weaker state of North Queensland,” he said.

He disagreed with secessionists’ arguments that the needs of North Queensland were being neglected by the government.

“Every Queenslander has equal representation in the state parliament following the abolition of the gerrymander after the 1989 election,” he said.

“Splitting the state means dividing the people of Queensland, something which benefits no one.

“Queenslanders want fewer politicians not more politicians, which is what would happen with a new parliament house and a new government house in Townsville, to satisfy the whims of a few malcontents.”

Political Science Professor Clive Bean, of the Queensland University of Technology, said state secession is not likely to happen.

“In effect, to be able to secede, an area would have to be ‘allowed’ to secede by the parent jurisdiction,” he said.

If North Queensland were to secede, Professor Bean said it would have a noticeable effect on citizens of the south.

“The extent to which it would hinder the south would depend on where the dividing line was drawn, but the most obvious impact would be in a reduction in the economic production capacity of the remaining area,” he said.

Mr Hallam said the impact of secession would be more than simply an economic loss.

“[There would be] the loss of sense of state, of Queensland being this big, diverse state,” he said.