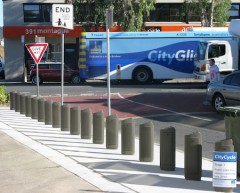 According to Brisbane City Council’s media officer, Christen Hill, council is “working towards this goal” by “implementing sustainable principles into everyday decisions and services”.

Council is attempting to engage residents and businesses in practical and affordable actions to reduce their impact on the environment.

Initiatives already in place – ensuring council is on track to achieving its goal – include the ‘Free Native Plants’ and ‘EzyGreen’ programs and council’s project in progress, CityCycle.

From September 1, 2010, Brisbane residents are able to subscribe to the CityCycle bike hire program, which will be up and running on October 1, 2010.

Individuals over the age of 17-years-old can sign-up for an annual card, a three month card or a casual subscription.

The annual subscription fee is the cheapest option, costing an individual $60.50; a three month subscription costs $27.50, and the casual fee is $11.00 per day.

At present, CityCycle stations are only located in Brisbane’s CBD, though, in time, stations will be situated in West End, St Lucia, Toowong and Newstead.

Ms Hill said the stations will be positioned every 200 – 300 metres to “provide an overlapping network” as well as in key inner-city locations to “link bus, train and ferry connections”.

Council aims to provide its residents with an “active, affordable and sustainable” public transport option.

“[CityCycle] will reduce traffic congestion and parking pressures in the inner city, as cars are replaced by cycle trips,” said Ms Hill. 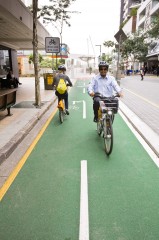 Cycling is a form of 'active transport'. Source: JCDecaux Australia.

According to Brisbane City Council’s Living in Brisbane 2026 document, council aims to have 41 per cent of morning commuters “walking, cycling or using public transport” to reach their destination.

TransLink, in conjunction with the Queensland Government, is working to “actively promote cycling and other forms of sustainable transport” as part of the Australian Government’s TravelSmart program.

TravelSmart aims to reduce people’s reliance on cars and to consider methods of ‘active transport’.

Not only does the TravelSmart program aim to reduce greenhouse gas emissions, TravelSmart is also concerned about the health and general wellbeing of Australians.

According to TravelSmart, active transport is a way for Australians to “obtain the required 30 minutes of moderate physical activity daily”.

When, and if, commuting by car is the only method of transportation, TravelSmart advises carpooling as an environmentally friendly way to travel.