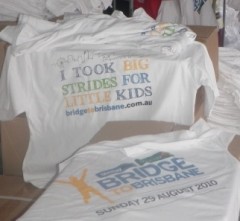 The 2010 Sunday Mail Suncorp Bridge to Brisbane has pledged its funds to Autism Queensland to support the increasing number of children diagnosed with autism each year.

The funds raised will be donated to Autism Queensland’s Kidstart and Early Intervention programs which target the specific needs of individual children throughout Queensland.

This year Autism Queensland has carried out 94 Kidstart and 25 Early Intervention programs across the state, and funds raised will enable the organisation to reach more children.

Autism Queensland Fundraising and Marketing Manager Paula Davidson said “one in 160 children between six and 12 years have an Autism Spectrum Disorder – that is over 10,000 Australian children.

“That means the condition is now more common than cerebral palsy, diabetes, deafness, blindness and leukaemia put together.

“An event like Bridge to Brisbane means a lot to Autism Queensland. The funds raised are obviously a big help to our services but the awareness that comes with an event of this magnitude is also extremely beneficial,” Ms Davidson said.

Donna Burns, who has been heavily involved in fundraising for Autism Queensland, walked the 5km event with her son Matthew who was diagnosed with ASD at an early age.

“Autism Queensland being the major beneficiary is fantastic, the increase in financial support will open many doors for those children who are heavily locked in with their autism and struggling with behavioural issues and developmental milestones,” she said.

“It is a known fact that there is no cure for autism, but the best treatment is early intervention. 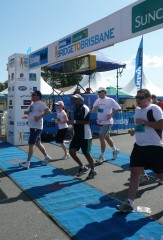 “At present, finance available only permits limited programs for a restricted number of children. With greater funding, more children will be able to access these services,” Ms Burns said.

“The group that I walked with were all staff and we all had the same motivation, to support and raise money for Autism Queensland.”

Ms Brinckman said, “I know quite a few other people who take part in Bridge to Brisbane every year enjoy both the event and the fact they are raising much needed funds for beneficiaries like Autism Queensland.”

Fundraising and Marketing Manager, Paula Davidson, said “As you can imagine, from the increased awareness we have received many generous donations since Bridge to Brisbane.

“All fundraising initiatives and donations raised throughout the year are important to us because every bit counts, however Bridge to Brisbane marks a big step forward for our organisation.”

At this time, Autism Queensland is waiting on the final results of Bridge to Brisbane and a sponsor’s cheque will be presented in November.