Festival lovers are furious and are being left out of pocket after the popular music festival ‘Parklife’ announced yet another venue change.

The Brisbane Botanical Gardens and Riverstage has been home to the festival since the beginning, but now in its tenth year organisers made the surprising announcement that the hugely popular event would be moving to the Gold Coast Parklands.

Originally in July, spokesman for the festival organiser ‘Fuzzy’ 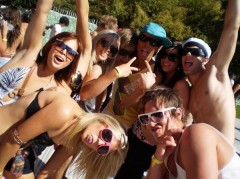 The event is held annually all over Australia. Photo: Maximilian Kosmala

said the event would be moving due to the Brisbane location no longer being big enough to hold the occasion.

“Queensland Parklife has been the first event to sell out for the past four years, so we needed to provide our fans here with a better venue and bigger capacity where they can see all their favourite acts,” he said.

Shortly after tickets were released on sale across the country, event organisers suddenly announced that Parklife would be returning to Brisbane, leaving hundreds of ticket owners furious with the lack of communication and planning.

Festival organiser and Fuzzy Director Adelle Robinson said the Gold Coast Parklands were no longer being considered due to a number of operational issues.

“Despite months of negotiation and the efforts of Parklands, Gold Coast City Council and Queensland Police, we have been unable to ensure that the event can deliver a completely top class customer experience,” she said.

“And it has become clear that Parklife will be a higher quality event for festival-goers if it’s held at the Brisbane Botanic Gardens & Riverstage.”

This announcement is an unwelcome surprise for the hundreds of ticket holders who have already booked and paid for accommodation and transport for the event at the Gold Coast.

Sarah Burdett from Brisbane purchased her ticket the day they were released and had planned to stay at an apartment in Surfers Paradise for the night with her friends. The sudden change of venue left her with an option to either pay an additional booking fee or forfeit the amount already paid.

“I contacted the hotel and asked if I could transfer the booking to another date, but management said this was only going to be possible if I paid the cancellation fee,” she said.

“Luckily, I was able to find someone to go down for the weekend and reimburse me, but I know some of my other friends were forced to pay the fee which was almost the equivalent of a night’s stay”.

Ms. Burdett says she is disappointed with the lack of planning and extra time and effort she has had to put in to change accommodation, but is hopeful the event will be a success.

“While I was looking forward to going away for the weekend and spending the next day at the beach, I think the Botanical Gardens in Brisbane is still a great venue and will be a lot easier to organise transport,” she said.

While Parklife organisers have done little to help stranded ticket holders in regards to their hotel accommodation, Fuzzy Co- director John Wall has announced there will be a scheduled bus service to the event.

“We will be providing a free shuttle bus right to the door of Parklife Brisbane from Surfers Paradise to ensure no-one who has bought a ticket misses out,” he said.

“We sincerely apologise for any inconvenience the move causes to those who have bought tickets”.