The Brisbane Broncos youth team have ended their Toyota Cup season in the best fashion possible, with a last-gasp 40-36 victory over the finals-bound Canberra Raiders.

The see-sawing match was one of the most exciting games of the season, with the result being decided in the last play of the game. 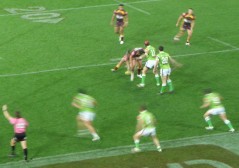 The Broncos on the attack in the first half. Picture: David Lather.

“I was just really happy for them to get away with a win and get a scalp of the Raiders who are above us and have made the finals, just to finish the year off,” he said.

“We didn’t complete a lot of our sets in that middle section of the game…but we came together well at the end and got away with it, so it was pleasing.”

Raiders youth coach David Hamilton was more subdued, but said he could take some positives from the match.

“To let the game get away, they (the Raiders players) were pretty disappointed with their effort in the end,” he said.

The young Broncos shot out of the blocks, scoring three quick tries to lead 18-0 after 15 minutes.

Leading Raiders pointscorer Chris Medcalf put a stop to the Broncos’ momentum, following up a superb try in the corner with an even better conversion from the sideline.

Broncos fullback Dane Gagai was everywhere, and responded with a try to keep his team’s score ticking over.

However, the Raiders were slowly earning their fair share of territory and possession, and they kept in the contest with a try just before halftime to make the score 22-12.

“To come back in that first period was pretty good…we showed character there I thought, and that is a real positive,” Raiders youth coach David Hamilton said.

The match was delicately poised at halftime, and no one could have anticipated what was to come in the second half. 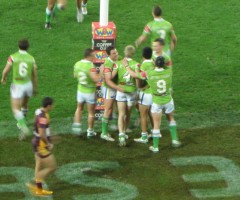 The Raiders celebrate after scoring one of their second-half tries. Picture: David Lather.

The Broncos scored first through Jordan Kahu, but that only ignited the Raiders, who piled on four converted tries in scintillating football, to turn a 26-12 deficit into a 36-26 lead.

One could sense the Broncos were disheartened and dejected, but the fighting spirit of these aspiring NRL footballers cannot be denied, and they summoned one last charge.

When Lachlan Maranta surged onto a brilliant kick into the in-goal area, the margin had been trimmed to two points, awaiting a conversion from Gagai.

But the fullback seemed to have lost his golden touch that was so evident in the first half, as he missed his fourth straight conversion, leaving the home side 36-34 down with five minutes to play.

The match-winning move was left to the final play of the game, as the siren sounded just as the ball was passed to Bronco Corey Norman.

He quickly booted the ball high into the air, an expert kick into the corner.

Amidst the chaos the ball was fumbled and allowed to touch the ground, leaving Kahu to swoop on it and post his match-winning fourth try, much to the delight of the Broncos faithful.

The game marked the end of the Broncos season, leaving them in tenth spot and out of the premiership race, while the Raiders will be determined to put the result behind them as they enter week one of the finals.