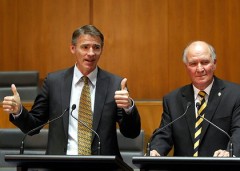 Rob Oakeshott and Tony Windsor stand by their choice to back Labor. Photo: Andrew Meares.

Kevin Rudd has been appointed Foreign Minister in an effort to appease voters in Queensland still disgruntled by his ousting as prime minister by Julia Gillard and the Labor Party.

Queensland, Mr Rudd’s home state, proved one of the most hostile during Gillard’s campaign, mainly linked to the controversial way in which he was disposed by the Labor Party.

Although Associate Professor Graeme Orr, a political expert from the University of Queensland, does not believe that appeasing the Queensland voters was the only cause of Mr Rudd being assigned Foreign Minister, it arguably remains a legitimate Opposition criticism of government.

“If that was the case, they would have made him Foreign Minister before the election,” he said.

“But obviously there also needed to be the appearance that the relationship between Rudd and the Labor Party was being patched up so she promised him a senior Minister position.”

Associate Professor Orr added that it wasn’t a surprise Mr Rudd was appointed Foreign Minister given he was previously the spokesperson on foreign affairs before becoming Prime Minister.

Ms Gillard has promised to work closely alongside Mr Rudd, just months after he was expelled over concerns about his leadership.

“We will be working together in the interests of the nation. Leaders and foreign ministers have to work together,” she said.

Bob Katter, the third independent MP involved in deciding the future prime minister, gave his support to Tony Abbott and the Liberal Party.

Mr Katter indicated that his decision might have been different had Mr Rudd still been head of the Labor Party.

The election on August 21 was the first since 1940 that failed to deliver a majority vote to either party.

Mr Oakeshott, who recently rejected a ministerial position, announced that he would still be willing to accept the position of Speaker in the Lower House.

Mr Windsor and Mr Oakeshott also denied any rumours that they were considering swapping their support to the Coalition after an appeal from Mr Abbott.

Both men attributed their decision to Labor’s views on climate change and the National Broadband Network.

“I make this plea to country people, some of whom don’t agree with the Labor Party. This isn’t about philosophy, philosophy in terms of both these parties died about a decade ago,” Mr Windsor said.

“This is about using the political system to advance the people we represent and those people in regional Australia.”

He said this opportunity to give regional Australians a chance to engage with major infrastructure projects such as national rail network upgrades was too good to miss.

Mr Oakeshott and Mr Windsor, both from country northern New South Wales, cited the importance of supporting both urban and rural priorities, particularly in regards to education and broadband access.

Ms Gillard indicated her intention to honour her agreement with the two independents during a media conference by discussing how funding will be distributed.

“The next round of health and hospitals funding will be focused and dedicated to regional Australia,” she said.
“So will the next round of funding from the education investment fund.”

Overall she announced that regional Australia, including rural areas of Southeast Queensland and Northern NSW could expect $9.9 billion in benefits.

She said that due to the deals struck with the independents, Australians can expect a better standard of accountability from the government.

Ms Gillard also conceded that the closeness of the election was a clear indication that voters want the parties to work in a closer union, to better federal government decisions as a whole.

“I pledge my best efforts as prime minister to work constructively with you and your colleagues to find common ground where we can,” she said.

“I know that if we fail in this solemn responsibility, we will be judged harshly when we next face the Australian people at the next election,” she said.