The Queensland University of Technology Association of Law and Justice Students (QUOTALS) 2011 voting has ended, leaving the future of the association hanging between two distinct party nominations.

The election, which started on Monday, allows Queensland University of Technology (QUT) students to vote for next year’s QUOTALS executive and committee teams, who will be responsible for the law faculty’s events and activities.

The two nominations, ‘the Change Party’ and ‘Beyond’, have differing strategies for the improvement of the association. 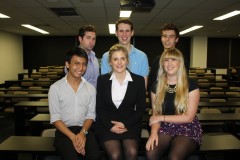 The Beyond executive team. Source: Ivan Ingram, used with permission.

Abby Zeith, President of Beyond, said her party wants to ensure students feel more comfortable with the law faculty by eliminating negative stereotypes.

“We want to challenge the status quo and make sure the students know we’re not an elitist society,” she said.

Ms Zeith said it was important for students to acknowledge the range of different career possibilities that a law degree can generate.

“[Beyond] wants to show the students that there’s more to a law degree than just working at the big firms: a law degree is like having a key to all sorts of doors,” she said.

Beyond aims to do this by increasing QUOTALS involvement in legal competitions, and introducing new volunteer opportunities. 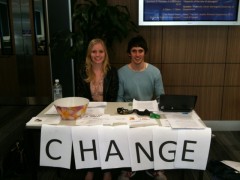 The Change Party during the election. Source: Tara Bosworth.

“Employers look really highly on extra-curricular involvement so we want to make sure the students get involved in these activities,” Ms Zeith said.

“They can present students with different career pathways and different people they can meet.”

Opposing nomination, the Change Party, as its name suggests, aims to initiate change within QUOTALS.

Robbie Ahchee, President of the Change Party, said the association generally remains the same every year.

“We believe that all law and justice students should have a say to change things,” he said.

“We want to have more social events especially for … external students, because these are the students that are usually ignored by the society,” he said.

If elected, the Change Party would lobby for a common area in the law library that is exclusively for law and justice students.

“We want to make the QUT law faculty the premier law faculty in technology in Australia,” Mr Ahchee said.

“By doing that we believe we can get students the best jobs with the best firms.”

The QUOTALS election results will be announced this week.