Sea World marine experts and animal activists are pushing for the removal of shark nets during whale migrations after a humpback was freed from the nets off Surfers Paradise Beach on Saturday last week. 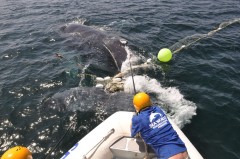 The seven-metre sub-adult humpback whale was migrating south when it became entangled in the shark net; the first so far this season.

“The nets were put in place simply to make tourists feel safe in the water,” she said.

“Sharks can easily swim around the nets which don’t run the entire length of the beach, nor to the sea floor and all marine animals, not only whales, are getting trapped inside the nets and die.

“They (the nets) are there only as a mind trick for tourists so they can see the buoys and believe in a false sense of security.”

He said the devices are designed to alert marine life to the presence of the nets in order to prevent entanglement however isn’t designed to scare them away from the equipment.

The alarms were fitted to shark nets between Mackay in North Queensland and the Gold Coast in early August to cover the second half of the whale migration season.

However the humpback whale became entangled despite the nets of Surfers Paradise being fitted out with acoustic alarms.

Sea World marine expert Trevor Long said the “pingers” could potentially have the opposite effect of driving the whales towards the nets.

“Whales, like dolphins, are very curious in nature and the noise of the alarms may even be an attraction to them, especially to young inexperienced calves,” he said.

“Female whales seek shelter close to shore to rest their calves during migration which will push them close to the nets regardless of an alarm system.

“The community doesn’t understand the seriousness of the situation…there’s an enormous loss of wildlife for this perception of protection.”

“No one likes to see whales, dolphins or turtles caught up in the nets or killed,” he said, “the reality is that it is going to happen.”

“I understand the emotion surrounding it…but at the end of the day we have to be quite realistic and ask ourselves: what do we want? People being killed on the beach or whales tangled up occasionally.”

Removesharknets.com is a campaign driven by locals from the Gold Coast, Tweed Coast, Byron Shire and Sydney aiming to educate the public of the major threat shark nets pose to the survival of marine life.

For further information or to have your say; sign the petition at removesharknets.com.