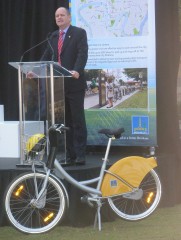 Campbell Newman declares CityCycle registrations open to everyone over the age of 17. Photo: Jessica Uhlmann.

The opening of subscriptions for the CityCycle bicycle hire scheme has sparked debate about the $8.2 million program’s validity.

Cr Newman says the scheme will reduce traffic by allowing people who sign up with the program to hire bikes for short trips in Brisbane’s inner-city.

But several Brisbane commuters are expressing doubts about whether the scheme is user-friendly.

Matthew Gustar of Newmarket says he is not convinced the program is worth the expense.

“I’m not sure whether I would use the bikes… I don’t even think it will save time because you will still have to wait at a lot of sets of traffic lights in the city,” he says.

Matthew Clark of Alderley says he is also unsure of whether the scheme will be successful.

“The bikes are meant to be aimed at business people… but I can’t really see myself riding on a bike in my work clothes,” Mr Clark says.

He said the CityGlider bus service is more convenient and the extra expenditure on bikes is not warranted.

But Cr Newman has acknowledged that critics are inevitable with any transport project.

He says the program will be successful because it is cost-effective and easy to use.

“The CityCycle program provides transport that is convenient and affordable,” Cr Newman says.

“It is great value because it costs you sixty dollars and fifty cents to use the bikes for short trips under thirty minutes for an entire year,” he says.

The scheme is also supported by the Heart Foundation, Diabetes Australia, and  Bicycle Queensland.

The Heart Foundation’s healthy weight manager, Sheree Hughes, says there are significant health benefits for people who use the bikes for thirty minutes of daily exercise.

“There will be a lot of benefits for people who take up the scheme as part of an active lifestyle, such as maintaining a healthy weight, decreased blood pressure and decreased stress,” Ms Hughes says.

Ms Hughes says she believes people will get involved and do the right thing for their health.

“I expect people will take up the program after they get into the habit of changing their routine… we have seen a lot of success with similar systems overseas,” she says.

The scheme will commence on October 1, 2010 and once complete it will offer 2000 bikes at 150 stations from St Lucia to Newstead.

Annual, 3-month and casual subscriptions can be purchased from CityCycle.