The annual music event partnered with Valley Fiesta this year, offering a feast of live music events and conferences.

Big Sound brings together a host of local, national and international artists, as well as industry representatives in a celebration of the Australian music scene.

It involves the culmination of live music performances from 60 bands and industry conferences with 120 different speakers.

The Executive Programmer of the event, Graham Ashton, said Big Sound is now in its ninth year and has grown into a significant and exciting date in the Australian music calendar.

What separates Big Sound from other music events, is its focus on discussion about the industry and the role it plays in promoting Australian music.

“Basically what it’s about is getting, I think, a very positive, inspirational and educational overview of where the music industry is at in 2010,” Mr Ashton said.

He said they were extremely pleased with the response to this year’s program. Big Sound Live – the live music component of the event – sold out and there were over 500 registrations for the conferences.

It will also generate money for the Brisbane tourism market – with not only music fans, but industry members from all over Australia, attending the event.

“It attracts delegates from all over the globe – buyers, whether they be record labels or managers or music supervisors, lawyers – they’ve come in from all over the wrold to see a bunch of bands play and speak on panels and just talk about the state of play in the music industry,” Mr Ashton said.

Though reluctant to single out favourites among the many talented artists, Mr Ashton was excited to feature two acts this year who currently hold singles in Australia’s Top Ten; Washington and Children Collide. 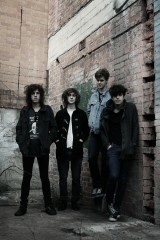 The Cairos are among the 60 artists showcased at this year's Big Sound. Photo Courtesy The Cairos myspace page.

“It puts a bit of a spotlight on the Brisbane scene and gives a chance for younger acts to come out and show their stuff,” he said.

Having participated in Big Sound last year without realising the full scale of the event, Mr Richardson said his band can’t wait to be involved this year and take advantage of all the three-day festival has to offer.

“I think it’s great – it’s all in the valley and it’s all around the place and you go from place to place. I mean, last year it was great fun because we got to see all these different bands from around Australia and it’s a real, sort of, artist’s community.”