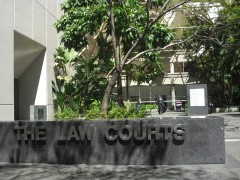 Mr Tan, 58, pleaded guilty this morning to the strategic murder of his schizophrenic wife Siew Kee Ang on March 13, 2009 after being infuriated over her cutting the cable on his stereo.

Mr Tan, who appeared via video link from jail, was found to have given his wife 84 tablets from her prescribed schizophrenia medication, Olanzapine.

For the previous 5 years, Mr Tan had been the sole carer of his wife, who suffered hallucinations due to her diagnosed schizophrenia.

Prosecutor Sarah Farnden said Tan, his wife and two daughters now aged 30 and 28, were living in Inala on the day of the murder.

At 7am on March 12, 2009 Mr Tan went to the local Taiwanese store, leaving his stereo playing music at home.

When he returned, he found his wife had cut the speaker cable to his stereo, which Mr Tan said angered him.

Mr Tan then gave his wife 84 tablets with water, which he says she took ‘as instructed’ over 15 minutes.

He recorded the events in his diary, which was presented as evidence in court, where he wrote, “Today I kill my wife. No joke!”

Ms Farnden said the accused had recorded the number of tablets he had given his wife so “if she survived, he would know to give her more next time”.

Mr Tan then went and smoked a pipe, had a drink and went to sleep in the spare room, where he awoke at 2am the next day to check on Ms Ang.

At midday that day, Mr Tan was changing his wife’s underpants after she had urinated in her bed, when he heard her stop breathing.

Having no phone, he called emergency services from the Taiwanese shop he’d visited the day before and told the operator his wife had overdosed and wasn’t breathing.

Police investigation that day revealed the empty medication bottles in Mr Tan’s bin, which he says he put there in case his daughters were to arrive home and see.

Ms Farnden says Mr Tan first denied responsibility but later confessed in a police interview that afternoon, rather matter-of-factly, that he wanted to kill her.

“So this is not a murder, not manslaughter and not an accident,” Mr Tan told police.

“My intention is to kill her.”

Justice Glen Martin said the only explainable reason for Mr Tan’s decision to kill his wife that morning was his anger over the cut stereo cable.

In the police interview, Mr Tan’s reasoning for the murder was that if he were to fall ill or die, no one else could care for his wife, and that it was best if he killed her, saying it was a “win-win situation for everybody”.

Despite this, when asked if he thought he was healthy enough to continue caring for his wife, Mr Tan said he was and “could do 50 push-ups”.

Mr Tan’s defence, Barrister Jim Benjamin, stood up with only an apology from Mr Tan.

“That’s the only submission I have,” Mr Benjamin said.

Justice Martin sentenced a calm and silent Mr Tan to life behind bars and declared Mr Tan had already served 552 days of his sentence in custody.

He replied, “Thank you Your Honour”.