Brisbane’s burgeoning cultural scene is set to cement itself as Australia’s top arts destination as it prepares for another exclusive event predicted to boost tourism and the economy. 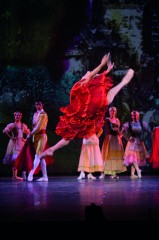 The Ballet Nacional de Cuba will perform one of the most celebrated and renowned ballets of all time, Don Quixote, in a season exclusive to Brisbane.

The Ballet Nacional de Cuba was established in 1948 by Prima Ballerina Assoluta Alicia Alonso, who today remains the companies creative director as well as one of the most prominent and iconic figures in American ballet.

Queensland Premier and Arts minister Anna Bligh says South-East Queensland has truly come of age and is the location for the country’s big arts events.

“Our ultimate goal is to position Brisbane as Australia’s new world city, focusing on the diverse range of events and experiences available in and around the region and indeed across the state,” she said.

“Major cultural events like the National Ballet of Cuba have a significant impact on our economy so it makes sense that we should capitalise on these upcoming events.”

Charlotte Walker, a senior teacher at Brisbane’s Premier Dance Academy, says performances such as Don Quixote have a positive effect on small businesses with a definite increase in enrolments.

“These days parents see the big buzz the dance community has on television as well as in the theatre and see it as a widely accepted medium which they want their children to be part of,” she said.

“They [major ballet performances] show that ballet’s not just a fad but a longer time activity that children can get a lot out of like confidence, performance skills and coordination.”

Mr Kotzas says exclusive performances assist in positioning the city, in Australia and internationally, as a vibrant cultural destination.

“QPAC presented 1,146 performances in 2009-2010, each of them contributes to creating a distinct, memorable and growing live performance environment in Brisbane,” he said.

Mr Kotzas says QPAC’s strategy in presenting exclusive high profile companies and performances has a significant social and cultural impact which is unique in helping to sustain Brisbane’s cultural prominence.

“There are obvious and immediate outcome including the Kudos associated with a successful season or a once in a lifetime chance to see some of the worlds greatest artists,” he said.

“When dancers from the Queensland Ballet rehearse with the Paris Opera Ballet or someone is inspired to attend the Queensland Symphony Orchestra because of their encounter with the London Philharmonic Orchestra,then there are outcomes that cannot be measured by ticket sales or revenue or media coverage.

“Instead there is a more tangible result, evidenced over time, one that contributes to the depth of the city’s long term creative growth.”

Don Quixote will run from September 24 – October 3 and is held in conjunction with the Brisbane Festival.

For information on tickets and times please visit the QPAC website at http://www.qpac.com.au/event/National_Ballet_Cuba_10.aspx