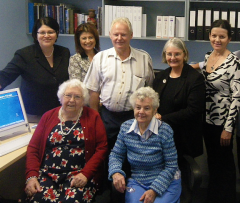 The kiosk opened on September 9 and provides free internet services and workshops to Australians aged 50 years and over to build confidence on computers.

Funded under the Federal Government’s Broadband for Seniors scheme, Ms Grace said while the technology may be foreign to participants, the program allows older Australians to stay engaged with the community.

“A lot of seniors are frightened of new technology,” she said.

“However, they will soon become confident in communicating with friends and family and the outside business world.

“Seniors can access information online about medication, or where a doctor is, as well as contacting family.

“It gives them the ability to feel part of modern society.”

The World Internet Project says 70 per cent of Australians aged over 64 do not use the Internet because of a lack of access and skills.

The Broadband for Seniors program provides one-off support worth up to $10,000 to help older Australians feeling ‘left behind’ in a technological age.

Seniors are provided with free access to Internet and computers, as well as online training and workshops to build community participation and social inclusion.

“We have attracted 30 participants in the two weeks we’ve been operating,” she said.

“Apart from offering the service to our members, it’s available for seniors in our local community.” MSCC workshop tutor Des Kyle said seniors are welcoming the program as it is “not exclusive”.

“We cater to virtually everyone that comes in the door,” he said.

“We’ve had people from intermediaries to people who’ve never used a computer before.

“Participants are learning quickly and feedback has been encouraging.”

The kiosks are accessible to seniors with disabilities and those from linguistically diverse communities.

The Federal Government launched the initiative in 2009, committing $15 million over three years to fund 2,000 kiosks nationwide.

The plan is implemented by NEC in association with Adult Learning Australia (ALA), the Australian Seniors Computer Clubs Association (ASCCA) and the University of the Third Age.