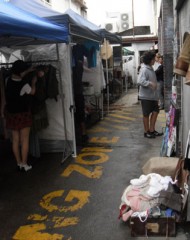 Little Winn Lane, the smallest of the three laneway markets, was the only one open last Sunday. Photo: Domnique Wiehahn

The markets started on August 8 in three laneways in Fortitude Valley.

Last Sunday, Little Winn Lane, the smallest of the three laneways, was the only one to open with the few stall-holders who turned up.

Market manager Nicole Ogilvie says this may have been because it was the first market stall-holders had to pay for.

“A lot of people took advantage of the free rental situation,” she said.

Ms Ogilvie says the poor weather and the fact that last Sunday was Father’s Day might have also contributed to the small turnout.

“[However] with time we are hoping [the markets] will keep building,” she said.

“We’re doing everything to try and make them successful, but ultimately we need the support of the community to succeed.”

Lust Not Want stall owner Sam Hawker also says the poor turnout might have been due to the end of the free stall period. 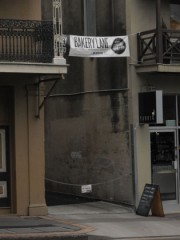 “People have dropped out because they had to pay,” she said.

“I really do hope more come.

“There are so many young designers in Brisbane with great ideas and this market is a great outlet for them.”

Ms Hawker also participates in the Valley Markets in Brunswick Street Mall on Saturdays and says she prefers the atmosphere of these new markets.

“The Valley Markets have more foot traffic but I much prefer the vibe of these laneway markets,” she said.

“Also I think people will come here more in the mind frame to buy, as it is very specialised.”

“I’m going to stick around and see how it goes,” she said.

“I think it will grow as it becomes more established.”

However, first-time visitor Janiece Rolley says the markets will need to change for her to come regularly.

“It’s very intimate and funky and I like it more than the conventional Valley Markets,” she said.

“But the size means I would probably only come once a season or so unless the stalls change their stock frequently.”