International students in Griffith University’s Business and Asian Studies and Politics degrees are facing stereotyping by  the local students, according to observations by local students of the same courses. 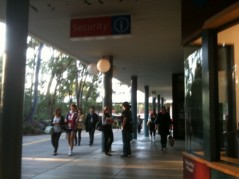 Melting pot...Griffith University says it is encouraging diversity amongst its students.

Some students have noted that this is an especially common occurrence in group selection in coursework, where the preferred group member is often the Australian with Caucasian appearance, while the international students are left to find their own group work members.

Nadiah Batchelor, a local third year student in the Bachelor of Business, feels that there is a growing perception that international students have a poor command of the English language, and are unable to communicate on the same level as the locals due to their backgrounds and difference in culture.

She elaborates that this view is not only adopted by students, but also the tutors of the courses.

Ms Batchelor has on many occasions observed that some tutors subtly convey this mindset in class with the way they approach teaching, particularly towards international students.

Through Ms Batchelor’s experiences, the stereotyping apparently does not stop at the international students.

It seems coloured or ‘ethnic’ local students experience this as well.

Ms Batchelor feels that as a local half-Australian, half-Indonesian student, especially wearing a head covering, she faces the perceptions that she is “not from around here”, and that she is less capable.

“On my first day of a tutorial, I told the class that I’m Australian, but the tutor insisted to know where I was really from,” she said.

Nadia Casas, a second year student of Asian Studies and Politics, believes this way of thinking is incorrect, because in most cases, the international students are quite hardworking and knowledgeable.

This is because their social and cultural barriers with the local students allow them to focus more on their studies.

“They find it hard to socialise and be comfortable and confident with the way they speak with us, so I see a lot of them just spend their time in the labs studying” she said.

From getting to know several international students, she also found that some have completed their degree or some portions of higher studies back home in order to gain entry to Australian universities or to be more competitive in the workforce.

Griffith Senior International Student Advisor Liz Daus said that the issue is being dealt with by way of a great emphasis on internationalisation by the University.

She elaborates that the strategy aims to implement school-integrated international curriculum practices for both domestic and international students to value diversity, international perspectives and  heterogeneous group work.