Brisbane’s north side is set to join the digital revolution with Labor’s $43 billion National Broadband Network coming to homes, business and schools. 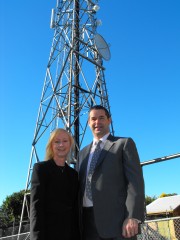 Federal Member for Petrie Yvette D’Ath said Bridgeman Downs, Fitzgibbon, North Lakes and Deception Bay will receive internet speeds of up to 1000 times faster than they are now.

“This will be a faster service available to households and businesses through the same optical fibre that is being rolled out now,” she said.

This follows Labor’s announcement that around 300,000 extra premises in Australia will receive optical fibre broadband during the proposed rollout.

“Labor’s NBN will only deliver some fibre coverage to listed towns, while many will also receive some wireless coverage,” she said.

“$43 billion dollars is a reckless amount to spend on a project that clearly states in the fine print it will not deliver what the minister promises.”

The LNP are urging Queenslanders to read the NBN’s fine print.

The Coalition will dump Labor’s NBN if it wins the election and instead, spend six billion dollars encouraging the private sector to extend broadband services.

They will deliver speeds of 12 megabits per second to 97 per cent of the population and, unlike the NBN, the infrastructure will be privately owned.

Despite this, Mrs D’Ath said the coalition’s broadband policy would be a step backwards.

“Tony Abbott’s policy would send our community backwards – he is a risk to our local economy, jobs and to quality education in the area,” she said.

Mrs D’Ath said the coalition’s broadband policy would result in thousands of fixed wireless broadband towers being built in suburbs across Australia.

“Dean Teasdale, the LNP candidate for Petrie, needs to come clean and explain how many more towers would be built in our electorate and where,” she said.

Leader of the Opposition Tony Abbott revealed he is prepared to alter his election promises on the proposed broadband plan in an attempt to win over the crucial independents.

“I don’t want to pre-empt the discussions that I expect will be had over the next few days, just to say that I intend to be very pragmatic, but within the broad policy parameters which we discussed during the election,” he said.

Broadband was a major difference between the ALP and LNP’s election campaigns and, with a hung parliament, it is now a key factor in negotiations.

Leading Independent Tony Windsor said he will fight for high-speed broadband for the bush.

“If there’s ever been one thing we need both sides of politics to agree on, [broadband] is it,” Windsor said in an interview on the ABC’s Q&A program.

“There are some significant regional issues that have been ignored and a broadband network is one of those.”

“If we get the fibre cable right, if we get the broadband system right, so there’s high-speed arrangements, it could revolutionise country living.”