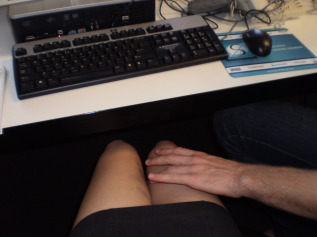 Ms Tankard Reist says sexual harassment begins in the schoolyard and the lack of education among young people makes them very vulnerable when entering the workforce.

She says the culture around sexual harassment of “it’s just a bit of fun” needs to change.

“Girls are harassed all the time – it’s part of life but this doesn’t excuse or justify it,” she said.

The acting Commissioner for the Queensland Anti-Discrimination Commission (QADC), Neroli Holmes, says sexual harassment can occur in a variety of social settings but is most difficult in the workplace.

Ms Holmes says sexual harassment is “just as common” but there has been reported change in its nature.

“Just as frequently now [sexual harassment] can happen between colleagues,” she said.

Ms Holmes the “typical scenario” of an employer or boss abusing their position of power to seek favours from a younger, more vulnerable employee “still does happen quite often”.

Ms Reist says employees new to the workplace are focused on settling into the new environment and systems are more likely to be victims of sexual harassment.

“Their vulnerability as young people should not be preyed on by those who should be more responsible,” she said.

A now 49-year-old project manager, who did not want to be named, says she was harassed by her manager at the age of 19 and says she felt “there was nothing I could do”.

“It is difficult for young employees who are harassed because they are less likely to know how to handle the situation,” she said.

A national telephone survey conducted by the Australian Human Rights Commission (AHRC) in 2008 found 22 per cent of females and 5 per cent of males have experienced sexual harassment in the workplace.

The 2008 AHRC survey also found there is a lack of awareness about what constitutes sexual harassment.

Both Ms Reist and Ms Holmes would like to see improved education programs in workplaces and school.

Australians commenting on a virtual forum about sexual harassment say there is not enough awareness.

Business director Steve Traynor said on the forum there was a fine line between what was and was not acceptable.

A university student writing on the forum said a lack of education, monitoring and penalties for offenders were contributing factors.

Ms Holmes says if people think they are victims of sexual harassment, they should ask the person to stop and if necessary, make a complaint to their workplace superior or directly to the QADC.

The Line, Queensland Government –Where do you draw the line?