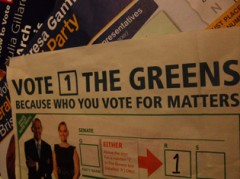 The Greens had a 13 per cent swing to the party on primary votes. Source: Dominique Wiehahn

An expert on voting behaviour and elections says the success of the Greens at last weekend’s federal election reflects a decrease of faith by voters in the two major parties.

The Australian Greens had record success in the federal election, winning a seat in every state, as well as the balance of power in the Senate.

The Greens also won the seat of Melbourne, their first Lower House seat in Federal Parliament in a general election, with a 13 per cent swing to the party on primary votes.

Queensland University of Technology political science Professor Clive Bean says voters are not confident in the two major parties and the leaders of these parties may have added to this lack of faith.

“The leaders of the two major parties – and perhaps the fact that they were both relatively new and untested – may have contributed to the support of the Greens in this election,” he said.

Professor Bean says “only time will tell” as to whether this support will continue in the future.

“People are sick of the old parties and their negativity,” she said.

“We had a very strong vote nationally … the Greens picked up majority of the swing against Labor.”

Ms Bennett says the success in this federal election will have a major impact on the future government.

“Every person who voted Greens … has radically changed the colour of the national Parliament,” she said.

Ms Bennett says “people are hungry for change” and the Greens are proving to be a good alternative to the major parties.

She hopes the support shown in this election continues in the future.

Greens Richmond candidate Joe Ebono also says the election success is connected to a public discontent with the major parties.

“Neither Labor or Liberal would talk about the serious issues,” he said.

“The Greens have been talking about the important things and have proven that they are a serious alternative.”

Mr Ebono says the Greens’ success in this election will change the view of the Greens being on the periphery and present them instead as a real alternative.