In a world first, Queenslanders are being offered the option of a water cremation.

As the only centre of its kind, Aquamation Industries recently opened on the Gold Coast in a bid to create a safer and more environmentally friendly alternative to cremation. 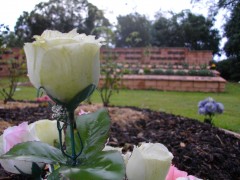 It is estimated the procedure only uses 10 per cent of the energy required for a standard cremation.

Aquamation chief executive John Humphries says that the public response so far has been positive.

“ We have done the research and so far there has been overwhelming support,” he says.

“It’s important to remember that the people that want to be buried will be buried regardless, although we have found that almost five to one are in favour of this to cremation.”

The official term given to the service they provide is aquamation.

Alkaline hydrolysis is the chemical science that is used in aquamation and is said to recreate the way bodies naturally break down after being buried.

“The process of alkaline hydrolysis happens every day in nature, but instead of it taking six months it only takes a few hours,” says Mr Humphries.

“The body goes into a steel capsule, and it’s filled with water. The water is moved around and it’s warmed up and we put potassium in to raise the pH level.”

Mr Humphries claims the liquid by-product of the procedure is not only safe, but put to good use.

“We use the waste water to fertilise the rose bushes at the crematorium – It makes a great fertiliser,” he says.

“This really is an ‘ashes to ashes dust to dust’ process, because we put the end procedure back into nourishing the earth, unlike cremation which burns it into the atmosphere.”

After the body has been broken down, the bones remain and these are returned to the family in an urn.

However, not everybody is embracing the idea of aquamation.

Earlier this year, a request put forward by Aquamation Industries to join the Australasian Cemeteries and Crematoria Association was denied.

Executive officer Ken Manders says that they simply haven’t heard enough about it.

“It’s a very embryonic company and we need to know more about them firstly if we were to allow them to join,” he says.

But he said there was nothing to say that Aquamation would never be admitted.

“It’s a new system that we will be watching with interest, but we can’t see it taking over burial or cremation any time soon,” he said.

Mr Humphries feels differently and believes that the idea will be embraced.

“The service will be available to people all over Australia within 12 months, I can see at least 30 centres opening in this time,” he says.

“This isn’t just an estimate, I am quite sure that this will happen.”