Staff members at Indooroopilly shopping centre have raised concerns that the complex is plagued by rats. 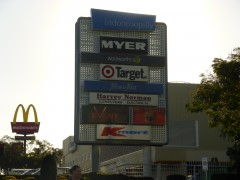 There have been numerous sightings of the rats, their urine and faeces within the centre.

“The whole centre’s overrun by rats,” said a Myer employee, who wishes to remain anonymous.

“They are coming up actually into the store now. Fine confectionary has been eaten.”

However, Indooroopilly centre management has denied the claims.

A McDonald’s employee who wished to remain anonymous also said there are no real issues with rats within the centre, but acknowledged every shopping centre has them, and the fast food retailer has taken preventative measures.

“Rat bait stations are out,” the McDonalds employee said.

Mr McCosker confirmed there are likely to be many and varied forms of pest control out.

But this has not helped ease some worried staff members.

“You can find the dead ones cause the smell is just unreal,” the Myer employee said.

“It’s just really disgusting and has become an employee joke not to eat anything,” another Myer employee said.

Rats pose serious health risks to humans, including contracting diseases such as salmonella.

Humans can catch these diseases from rat urine, faeces, saliva and when breathing in air that rats may have infected with airborne diseases.