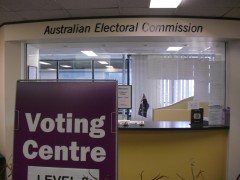 Young voters wield considerable power at the polling booths this weekend after 3434 voters between 18 and 24 were added to the Queensland electoral rolls.

Professor of Political Science at Queensland University of Technology, Professor Clive Bean, says though the extra voters are distributed over all electorates, it is possible they could have an impact.

Professor Bean suggests the additional young voters could boost votes for the Labor Party and the Greens.

“It’s possible that some city-based seats in which Labor is vulnerable might just scrape home,” he says.
Professor Bean says the preferred party of young voters changes over the years, but this year the Greens have the upper hand.

“A vote for a minor party is kind of a protest vote,” he says.

“There is that novelty factor.”

He says the level of interest in politics among young people is not particularly high.

“Young people haven’t had enough experience with the process.

“It’s not that they don’t care, but it takes time to develop a level of interest,” he says.

Electoral roll numbers have dropped since 2007, from 92.3 per cent of Australians having their say, to about 90 per cent.

Professor Bean says it is likely that young voters are a large proportion of those enrolled after electoral laws were amended on August 6, 2010.

“Yes, you can enrol before you turn 18, but a lot of people wouldn’t think about it until an election is called,” he said.

“A lot of people would have been turned off and didn’t even bother getting in their forms, because they thought they’d missed the boat,” he said.

Additional voter lists are now being sent to polling booths to include the recent additions to the rolls.