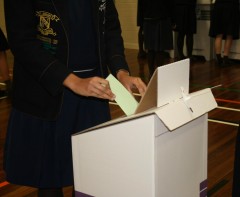 In a pilot project run by the Australian Electoral Commission, over eighty year 12 students at St Aidan’s Anglican Girls’ School took part in a mock election to cast their votes.

The first of its kind in Australia, this pilot project aims to engage and educate young people about the processes of voting.

AEC Education Manager, Beatrice Barnett, said “through this pilot, the AEC aims to engage young people in the electoral process in a meaningful way.”

Similar programs are run in the United States and Canada.

“This project will give students a sense of familiarity with the electoral process and confronts students with real candidates, people who can have a real impact.”

After her address to the students, each took their turn to fill in the ballot papers and decide who they think should represent the Moreton electorate in the House of Representatives.

A year 12 student, who will be voting for the first time on Saturday, said the pilot project was very helpful, introducing students to the process they will go through in coming years.

As AEC Acting Director of Community Engagement, Pieta Horgan said, this pilot project aims to “unlock the mystery of voting.”

“For a lot of young people, when they first get to vote it is their first real experience” of an election.

The strength of this pilot project lies in its practicality, which AEC First Assistant Commissioner, Kevin Kitson, said makes it relevant to the students.

“This authentic election, which allows students to cast a vote, surpasses any theoretical approach taken before.”

Students at St Aidan’s Anglican Girls’ School regularly vote for student representatives. However, this was their first opportunity to cast a vote for a real electoral candidate.

Dean of Students at St Aidan’s Anglican Girls’ School, Wendy Lauman, said “schools have a role to play in assisting students to be active in contributing to and shaping the world around them.”

“Understanding the electoral process enables them to consider how they can contribute to the policies that influence the way we live.”

According to statistics gathered by the AEC, 1.4 million people in Australia are not registered to vote and 70% of this group are aged between 18 and 39.

This project, if it is permanently implemented by the AEC, will continue to encourage young people to take an interest in their electoral responsibilities.

Beatrice Barnett said, with a network of staff around the country, this project has “the potential of growing.”

“We hope this pilot project will provide important feedback to the AEC about how it can best be implemented in the future.”

The pilot project was also run at Mary MacKillop College in Canberra with a cohort of 500 students.